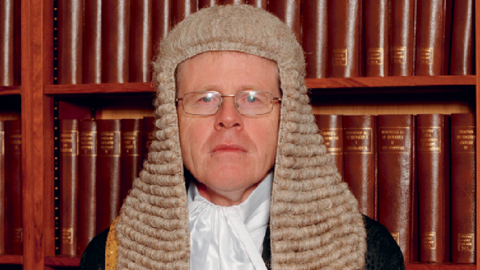 This was an appeal from the earlier decision that the deceased, when nearing the end of her life, had made a valid donatio mortis causa by delivering the title deeds of her house to her nephew, saying that he would need them after her death. She had made various failed attempts at wills giving him the house. The trial judge had found that those attempts indicated contemplation of death even though she was not suffering from any terminal illness.

The Court of Appeal reversed this decision and went out of its way to emphasise the need to strictly limit the concept, which can easily lead to fraudulent claims.

Lord Justice Jackson (pictured) reviewed the law relating to donatio mortis causa from its inception as a principle of Roman law, examining cases from 1743 up to the present day. He summarised the legal principles which emerged from the case law at [50]. He said there are three requirements to constitute a valid donatio mortis causa:

(2) D makes a gift which will only take effect if and when his contemplated death occurs. Until then D has the right to revoke the gift.

(3) D delivers dominion over the subject matter of the gift to the recipient (R).

He commented on the fact that donatio mortis causa has distinct risks. It enables D to transfer property upon his death without complying with any of the formalities of section 9 of the Wills Act or section 52 of the Law of Property Act, thereby paving the way for all of the abuses which those statutes are intended to prevent. The Court of Appeal had ‘rightly’ stressed in Birch v Treasury Solicitor [1951] 1 Ch 298 D that the courts must not allow donatio mortis causa to be used as a device in order to validate ineffective wills.

At [53] Jackson said: ‘I must confess to some mystification as to why the common law has adopted the doctrine of DMC at all. The doctrine obviously served a useful purpose in the social conditions prevailing under the later Roman empire. But it serves little useful purpose today, save possibly as a means of validating death bed gifts. The will may have been prepared with the assistance of a solicitor and in the absence of the beneficiaries. There are no such safeguards during a deathbed conversation. The words contained in a will are there for all to see. There may be much scope for disagreement about what D said to those visiting or caring for him in the last hours of his life.

‘In my view therefore it is important to keep DMC within its proper bounds. The court should resist the temptation to extend the doctrine to an ever wider range of situations.’

He then set out what he felt to be the proper bounds.

D should be contemplating his impending death. That means D should be contemplating death in the near future for a specific reason such as serious illness or an impending operation. It is not necessary for D to be actually on his deathbed, even though that is the situation in which the doctrine might be said to serve a useful social purpose (provided that no one is taking advantage of D’s dire situation). Nevertheless, it was clear on the authorities that D must have good reason to anticipate death in the near future from an identified cause. It is also clear on the authorities that the death which D is anticipating need not be inevitable. The illness or event which D faces can be one which D may survive.

On this basis, Vallee v Birchwood [2013] EWHC 1449 (Ch) had been wrongly decided. D was visited by his daughter in August. He was elderly and appeared to be in poor health. His daughter said that she would next visit him at Christmas. D said that he did not expect to live very much longer and that he might not be alive at Christmas. He handed over to her the deeds to the house and a key saying that he wanted her to have the house when he died. He died intestate in early December. The High Court had granted a declaration that D had made a valid DMC of his house. Jackson LJ said that D, like many elderly people, was approaching the end of his natural life span. However, he did not have a reason to anticipate death in the near future from a known cause. If D wished to leave his house to his daughter, he had ample opportunity to take advice and make a will.

The gift must be conditional in that it must be clear that it will only take effect if the contemplated death occurs. D should reserve the right to revoke the gift at will and, in any event the gift will lapse automatically if D does not die soon enough. In cases where early death is inevitable the law relaxes the requirement that D should specifically require the property back if he survives. However, subject to that qualification, the court should treat proper compliance with the second requirement as an essential element.

Applying these principles it was clear that the requirements were not satisfied. The deceased was not suffering from a fatal illness, nor was she about to undergo a dangerous operation or to undertake a dangerous journey. If she was dissatisfied with her existing will she could have gone to solicitors and made a new will.