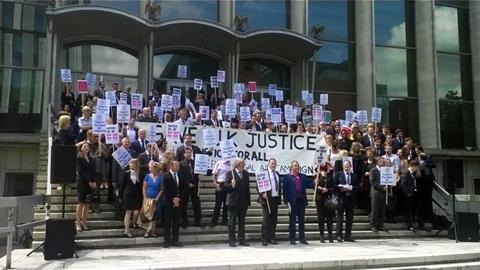 Members of the judiciary are demanding to know why unrepresented defendants are appearing in the Crown court, the Gazette has learned, as hundreds of solicitors gathered outside Manchester Crown Court to protest cuts to legal aid.

The Gazette understands that a Crown court judge has requested a written explanation as to why a solicitor had not applied for a representation order and was not present in a preliminary hearing at Chester Crown Court yesterday.

Meanwhile, hundreds of solicitors rallied outside Manchester Crown Court, Crown Square, to demonstrate unity over direct action, which began on 1 July, when a second 8.75% fee cut was introduced.

Zoe Gascoyne, a partner at Quinn Melville Solicitors and chair of the criminal practice sub-committee for Liverpool Law Society, told the crowd that the lord chancellor ‘needs to listen’.

More than 100 solicitors who attended a meeting after the rally voted overwhelmingly to ‘up the ante’ on action. It is understood that in practical terms this could mean solicitors withdrawing completely from duty work.

The Criminal Bar Association’s ballot on whether to go back to ‘no returns’ and refuse new work with a representation order dated from 1 July closed this afternoon.

The result is expected to be announced at 9am today.