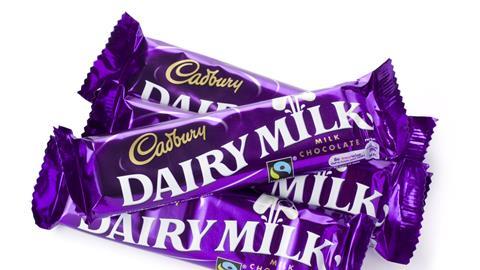 The Court of Appeal has upheld a judgment determining that confectionary maker Cadbury cannot revise part of a trade mark it owns by removing a description it feared had invalidated another of its marks.

The trade mark in question is for the purple colour adopted by Cadbury on many of its products, most recognisably on Dairy Milk bars. Cadbury owns two marks for the colour, one of which was invalidated following a lengthy dispute with rival Nestlé. The two companies also have an ongoing feud regarding Nestlé’s Kit Kat bar.

In 2014, Cadbury wrote to the registrar of trade marks at the Intellectual Property Office (IPO) submitting that the 876 mark ‘in fact sets out a series of two marks. One, referred to as ‘a’, applies to the colour purple on the ’whole visible surface of the packaging’, the other, ‘b’, that applies to purple being the ‘predominant colour’ on the packaging. It hoped to delete ‘b’ and retain ‘a’.

Cadbury, which feared its remaining trade mark could be invalidated, said it made the application in light of its dispute with Nestlé.

The registrar refused Cadbury’s request on three grounds: it did not apply for a series mark at the time of registration; there was no ’mark’ to be deleted because the words in the registration did not describe a trade mark, and any deletion amounted to alteration not permitted under the Trade Marks Act 1994. The High Court subsequently backed the registrar’s decision.

Writing the main judgment this afternoon, Lord Justice Christopher Floyd agreed. He found: ‘Beguilingly though it was put, I cannot accept Cadbury’s argument that there are two marks.’ According to Floyd LJ, once one starts to 'parse the description’ on the basis that every option gives rise to a different mark, you are faced with the fact that the predominant colour wording itself covers a multitude of different signs.

‘Rather than reach such a conclusion, the informed reader of the registration would, I have no doubt, conclude that the various alternatives covered by the description were not intended to identify separate marks, but were parts of a generalised but imprecise description of a single mark,’ the judgment said.

Sharon Daboul, chartered trade mark attorney at private client firm Harbottle & Lewis, said competitors such as Nestlé may now be considering their options in terms of cancelling the registration altogether. ‘Whilst today’s judgement comes as no surprise, it will be a blow for Cadbury with its oldest UK colour registration now being vulnerable,’ Daboul said.

Alex Borthwick, of counsel at IP firm Powell Gilbert, said one of the difficulties arising from Cadbury’s argument was the strict requirements for a series of marks. 'The courts have explained that a series of marks is a “bundle” of marks under a single reference number and that each of those marks must resemble each other,' he said. Borthwick added: ‘The sole condition that purple is the predominant colour covers a very wide range of marks many of which would not resemble each other or have substantially the same visual identity.’

A spokesperson for Mondelēz, Cadbury's parent company, said: ‘Our iconic colour purple has been used for Cadbury chocolate products for more than a century and is synonymous with the brand. We will continue to protect what we believe is a distinctive trade mark.’