Bill of Rights: 'Collision course with rule of law'

The provisions so far announced for the government's Bill of Rights will put the UK on a collision course with the rule of law, the Law Society said this morning.

'The erosion of accountability trumpeted by the justice secretary signals a deepening of the government’s disregard for the checks and balances that underpin the rule of law,' Society president I. Stephanie Boyce said in response to the announcement. 'The bill will create an acceptable class of human rights abuses in the United Kingdom – by introducing a bar on claims deemed not to cause "significant disadvantage".' 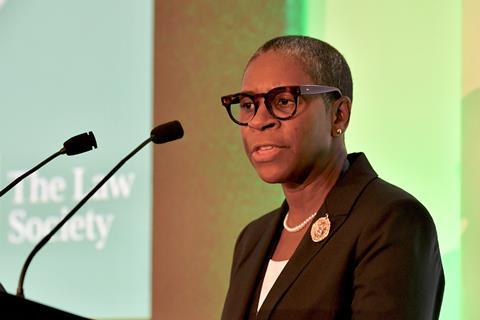 Boyce has denounced the measure ahead of its introduction in parliament

This would amount to 'a lurch backwards for British justice', Boyce said. 'Authorities may begin to consider some rights violations as acceptable, because these could no longer be challenged under the Bill of Rights despite being against the law.'

The Society was not the only body to condemn the measure ahead of publication. In a statement campaign group Amnesty International described the bill as 'a giant leap backwards for the rights of ordinary people'.

Sacha Deshmukh, chief executive, Amnesty International UK, said: 'Ripping up the Human Rights Act means the public is being stripped of its most powerful tool to challenge wrongdoing by the government and other public bodies. This is not about tinkering with rights, it’s about removing them.'

Meanwhile Sophie Kemp, partner and head of public law at London firm Kingsley Napley, said: 'Calling Dominic Raab’s proposals a "Bill of Rights" is another Orwellian turn from this government. It is, in fact, a worrying "Bill of Restrictions".'

Bruno Min, legal director of Fair Trials, said: 'The Bill of Rights threatens the rights and freedoms of everyone, and it must be stopped at all costs.'