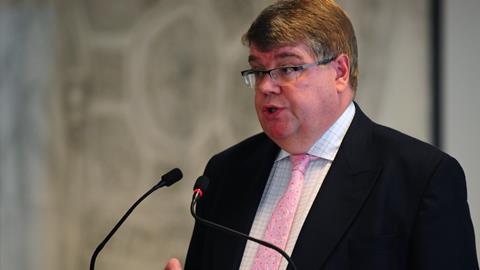 A High Court judge has accused a law firm of potentially breaching solicitor conduct rules in attempting to help a client avoid paying a debt. The court heard that national firm Keystone Law had been aggressive and may have, on the face of it, acted unlawfully in its correspondence with a claimant who had secured an adjudication award against its client.

At one point Keystone wrote to the opposing party: ‘You will get nothing then. Goodbye.’ Ruling in Bernard Sport Surfaces Ltd v Astrosoccer4u Ltd, The Honourable Mr Justice Coulson described this language as ‘breathtakingly rude’ and ‘plainly part of the intention to misuse the insolvency proceedings’. A further email, the judge suggested, amounted to a breach of the rules relating to the proper conduct of solicitors.

Coulson said Keystone solicitors had attempted to re-open mediation despite its client ‘undisputedly’ owing money from previous proceedings. Bernard Sport Surfaces, the claimant in the case, was issued an award of £176,000 from an adjudicator in July.

The dispute related to work carried out to a football pitch at the Whyteleafe Football Club in Surrey.

Keystone wrote in August saying Bernard could either mediate in the next seven days and stand some prospect of securing some payment, otherwise its client would enter an insolvency process.

Bernard's solicitors, Leicester firm Spearing Waite, pointed out this was potentially an abuse of process or amounted to trading whilst insolvent. This was a ‘fairly mild response’, Coulson observed.

The judge added: ‘The aggressive tone of the letter of 18th August is one thing, but the content is, I think, a clear threat that unless the claimant embarks on a course of action which does not involve him getting his money, the insolvency procedure will be used. On the face of it, that is unlawful.’

He said there was no evidence of any actual insolvency and described the tactics as a ‘classic example’ of two directors using Victorian company legislation to avoid paying a due debt. ‘That of itself, is (regrettably) not unusual,’ he said. ‘What is unusual here, in my judgment, is the connivance of Keystone Law.’

The judge entered judgment for the claimant for £176,000 and said the defendant was also liable for £8,000 for the adjudicator’s fees.

In a statement, Keystone Law said: ''We are aware of the ruling of the Honourable Mr Justice Coulson in Bernard Sport Surfaces Ltd v Astrosoccer4u Ltd and his comments pertaining to activity undertaken by Keystone. An internal investigation is already underway and once concluded we'll take the necessary action.'