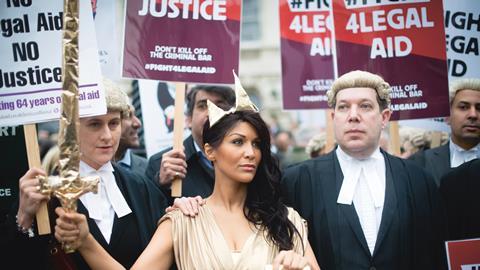 Criminal barristers will refuse to take new work from Sunday in protest at government cuts to the legal aid budget after 90% of survey respondents backed direct action, the Gazette can reveal.

The Criminal Bar Association (CBA) said today (click the icon at the bottom of the article to read the full statement) that the decision was taken with ‘heavy hearts’ but that the situation was ‘desperate’.

Over the past week the CBA surveyed members on whether there should be ‘action for justice’. According to today’s announcement, of 2,317 respondents, 2,081 voted in favour of action over a new formula for calculating legal aid fees for advocates.

It marks the first time direct action has been taken since the ‘no new work and no returns’ action of 2014 and 2015.

Angela Rafferty QC, CBA chair, said: ‘The system is desperate as are we. We are informing our members today that they should consider not taking any work from April 1, the implementation date of the reforms. We will hold days of actions. We will fight to improve the justice system for us and everyone else. We announce this action today with heavy hearts.’

Barristers sets Garden Court Chambers, 25 Bedford Row and Doughty Street Chambers have all already indicated that they will support action.

The CBA’s move comes after it emerged the House of Lords’ secondary legislation scrutiny committee had written to the Ministry of Justice seeking clarification on the revised Advocates Graduated Fee Scheme (AGFS), which determines how advocates are paid in legal aid cases. A government impact assessment claimed the changes would increase legal aid spending by an additional £9m per year but the Bar Council and the CBA say the reforms actually amount to a £2m cut.

Rafferty added that, according to the Treasury’s own figures, the MoJ resource budget will fall by 9% over two years to £6bn by 2019/20.

The government has also cut the Litigators’ Graduated Fee Scheme, which remunerates solicitors. Earlier this week legal aid solicitors indicated that they would stand shoulder to shoulder with barristers, and today the Young Legal Aid Lawyers issued a statement of support.

Law Society president Joe Egan said: ‘The action announced today by the Bar shines a light on wider concerns shared by lawyers that criminal legal aid services across England and Wales, and justice itself, are under threat.

‘The same concern has led us to issue judicial review proceedings against cuts to fees for Crown Court work.’

He added: ‘The rates paid to legal aid solicitors have not been increased since 1998 and the Law Society has consistently warned that the fragile criminal legal aid market cannot stand any further cuts. Despite this, the MoJ implemented further fee cuts in December 2017.’

Shadow justice secretary Richard Burgon, said: 'That lawyers feel they now must resort to taking action underlines the depths of this crisis. Labour has submitted a motion opposing the government’s planned changes to the criminal legal aid remuneration scheme and calling for any changes to be debated fully in parliament. More widely, the government must urgently step forward with investment to fix our broken justice system.'

A Ministry of Justice spokesperson said: 'We are extremely disappointed with the position the CBA has taken today, especially given that they and other members of the bar participated fully in the design of the scheme. Our reforms will reflect the actual work done in court, representing better value for the tax payer, and will replace an archaic scheme under which barristers were able to bill by pages of evidence.

They added: 'We greatly value the work of criminal advocates and will continue to engage with the bar moving forwards.'