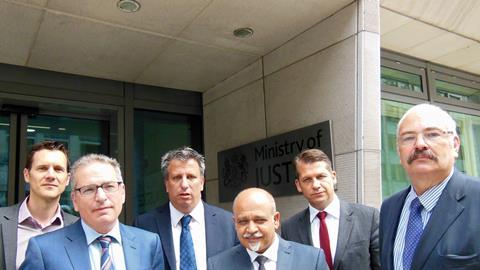 Practitioner groups have described this morning’s meeting with the justice secretary as ‘potentially constructive’ as a nationwide boycott over legal aid cuts looks set to continue.

The Criminal Bar Association did not attend the meeting.

CLSA vice-chair Robin Murray told the Gazette there was an ‘invitation to have a dialogue’.

LCCSA president Jonathan Black said the meeting was ‘potentially constructive’ but would not comment on whether nationwide action being undertaken by thousands of solicitors since 1 July - when a second 8.75% fee cut was introduced - would be suspended.

Speaking minutes before heading inside the MoJ’s headquarters to meet Gove, Black said he hoped the justice secretary would ‘listen, stop the cuts and review the disaster that is the two-tier [duty contract] programme’.

Murray said he was ‘sorry’ that the CBA would not be at the meeting, noting that there appeared to be ‘confusion’ as to why it was not attending.

Murray said: ‘We asked who from the CBA would be here but we did not hear back. They were going to be here as an observer which we of course were happy with. I’m sorry that they are not here.’

The Gazette has asked the CBA for a comment.