A criminal defence solicitor was left justifiably perplexed after receiving a surreal message from the Legal Aid Agency today.

On 29 September, Andrew Gurney, a director at Gurney Harden Solicitors, asked the agency on Twitter if there was any news on the outcome of the government’s tender for new criminal legal aid contracts.

The agency responded at 6.05am with the following tweet (below). 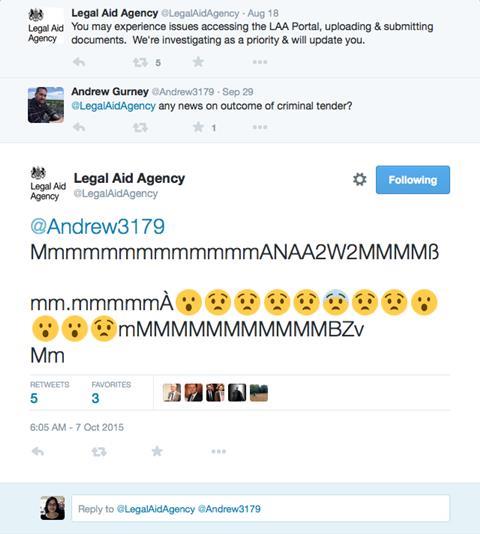 A spokesperson for the Legal Aid Agency said this afternoon: ’This tweet was clearly unintended and we are looking into what has happened.’

Solicitors were expected to be told last week via the agency’s Bravo e-tendering portal whether they had won one of a reduced number of contracts to provide 24-hour cover at police stations.

However the Ministry of Justice announced on Friday that bidders would not be notified until 15 October.

Despite the delay, the ministry said new duty and own-client contracts will still commence on 11 January next year.

Gurney told the Gazette : ’I thought not only do the LAA treat solicitors with contempt by delaying the contract outcome notification date when people’s livelihood is at stake but when they do respond it is nothing but nonsense.

‘But at least the LAA are nothing if not consistent.’