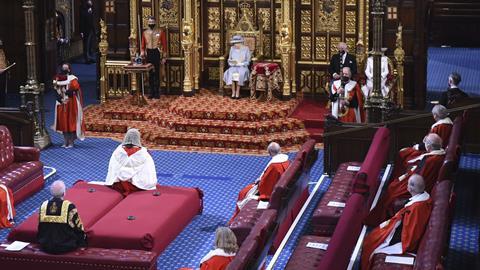 Queen’s speech: JR bill to 'restore the balance of power'

Legislation to 'restore the balance of power between the executive, legislature and the courts' was announced in the Queen's speech today - ahead of the outcome of the government's consultation and the independent review into the working of the Human Rights Act. A Judicial Review Bill is among 31 pieces of legislation to be presented by the government in the new parliamentary session.

As widely trailed, the programme includes a new planning bill. In what is expected to be the biggest shake-up of the planning system in decades local authorities would be forced to set new zones for housing. Meanwhile a Leasehold Reform (Ground Rent) Bill would end the practice of ground rents for new leasehold properties.

Commenting on the planning announcement, the Law Society warned against the dangers of hasty reform. 'While planning reform is much needed, hurried reforms will not be sustainable and would risk uncertainty and damage to both the physical environment and the overarching principles of planning,' said Society president I. Stephanie Boyce. 'Making sure that new laws are good laws will take time and thorough consultation is needed. Any reform should not overlook the inherent complexities of the planning process.'

Among the other measures announced today are:

- A Professional Qualification Bill, allowing the government to recognised professional qualifications from other countries across the world.

- A Borders Bill will seek to dissuade migrants from entering the UK across the channel. Only those who enter the UK through legitimate routes will be entitled to indefinite leave to remain. Those who claim asylum after entering the UK will be granted only 'temporary protection status', subject to regular reassessment.

- A draft Online Safety Bill will help the government 'lead the way on internet safety for all, especially children, whilst harnessing the benefits of a free, open and secure internet'. It will propose to give Ofcom powers to fine internet giants up to 10% of their global turnover if they fail to show a duty of care to users.

- An Espionage Bill will update the Official Secrets Act and force officials working on behalf of foreign governments to register with the UK authorities or face deportation.

Meanwhile the speech announced that the Police, Crime, Sentencing and Courts Bill introduced in the last session will be taken forward, introducing increased sentences 'for the most serious and violent offences' and measures to ensure the 'timely administration of justice'.

The announcement on judicial review comes less than a fortnight after the Ministry of Justice closed a controversial consultation on proposed reforms.

Robert Buckland’s department has been consulting on a wide range of proposals that go beyond what the Independent Review of Administrative Law recommended, such as legislating to clarify the effect of statutory ouster clauses, which define the bounds of the court’s jurisdiction.

However, the consultation document stated that the department was consulting on the proposals ‘at an early point in their development and are very aware that certain proposals will need further iteration, before we can consider bringing forward legislation’.