'This is the future': HMCTS unveils £8m Birmingham transformation

The government is continuing to highlight the results of its £1bn investment plans to modernise the justice system – announcing today that it has spent £8.12m to transform Birmingham Civil Justice Centre into a 'prime example of the future of our courts and tribunals'. 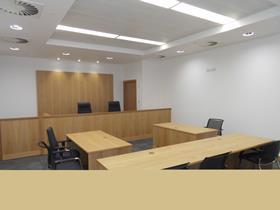 A dozen multi-purpose and digitised courtrooms, 'modern' public space and 19 rooms for the judiciary have been built in the combined civil, family and tribunal justice centre, which now houses a total of 59 courtrooms and chambers, 60 judges and 223 members of staff.

The ministry says the county court is one of the busiest in the country and was responsible for 3.3% of national civil cases issued in the past 12 months. Also in the past year, the family court received 496 care and 1,945 private law applications, and 3.5% of national social security and child support cases were listed in Birmingham.

Justice minister Lucy Frazer said the regional investment 'is just one example of how our reform programme will modernise our courts and ensure swifter justice.' Susan Acland-Hood, HM Courts & Tribunals chief executive, said the centre 'is a prime example of the future of our courts and tribunals'.

Today’s announcement follows recent declarations that the government is piloting video courtrooms with members of the public, starting with tax appeals, and is letting people submit their tax appeals online.

HMCTS also said today that it has raised £114.7m from selling 'underused and poorly equipped courts'. It proposes closing a further eight courts, saying work can be done away from physical court buildings.