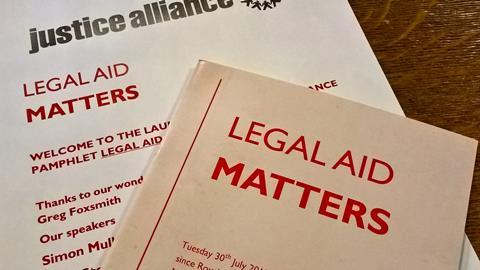 Justice campaigners have pulled together 70 significant cases over the past seven decades that involved public funding to highlight the importance of legal aid. Justice Alliance unveiled its booklet, Legal Aid Matters, last night to commemorate 70 years since royal assent was given to the Legal Aid and Advice Act.

The booklet contains summaries from prominent members of the profession of cases that have developed, changed or contributed to the law. The foreword was written by Lady Hale, president of the Supreme Court.

Housing solicitor Simon Mullings, a member of the alliance, told the event that the booklet's purpose was to 'tell the history and stories, bang the drum for legal aid as a crucial pillar of the welfare state, make people get the fact that legal aid really does matter'.

Campaigner Carol Storer, interim director of Legal Action Group, which published the booklet, said the government's legal aid review addressed many important issues 'but sadly with further delays while more analysis is carried out. No such thorough analysis was needed or sought when all the cuts came in with LASPO'.

Having 'been on strike and taken judicial reviews', Cris McCurley, a partner at north-east firm Ben Hoare Bell, said 'there is so much more to do, but we can do it if we do it together. You, me, we're all warriors'.

Immigration solicitor Kaweh Beheshtizadeh highlighted the personal importance of legal aid. Beheshtizadeh was born in a Kurdish village in Iran during the Iran-Iraq war. He was represented by a 'dedicated' legal aid lawyer when he came to the UK to claim asylum.

He said: 'I have seen so much first-hand suffering during my work as an immigration solicitor. People moved from the UK wrongly, so many families separated, so many refugees who could not be reunited with their family members because of cuts to legal aid. That has to end.'

Marcia Rigg, whose brother Sean died in police custody in 2008, recalled the 'gruelling, personal and intrusive' legal aid means-tested forms that her family was required to complete to be represented at the inquest. 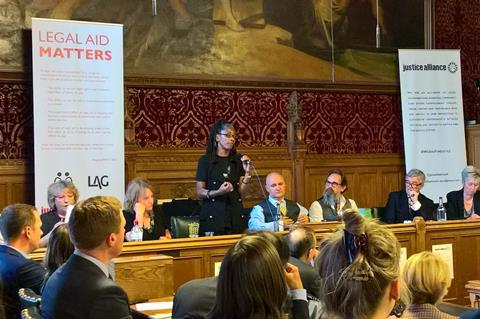 Rigg said: 'All our family members had to complete the form. My mum lives in the US. They wanted to know what property she had there, what jewellery we had under our floorboards literally. What my beloved father had left us, who had died eight years before. How much money we had, how many assets we had. When I first saw the form I wanted to screw it up and throw it in the bin. I was so angry... The family was told we had to contribute £21,000 for legal representation at Sean's inquest to find out why he died... Why does the family have to pay the state to find out how he died in their custody?'