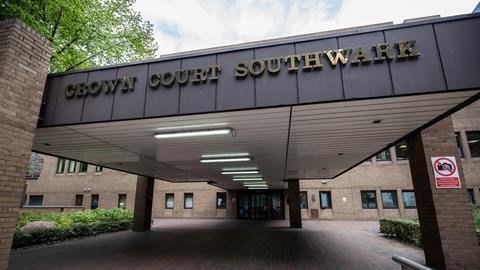 A solicitor accused of dishonestly funnelling nearly £20m of investors’ money from a legal financing fund into his own pocket began ‘hiding the ill-gotten gains’ shortly after he was contacted by an investigative journalist, jurors heard today.

Timothy Schools, 61, is said to have received ‘just over £19.5m’ from the Cayman Islands-registered Axiom Legal Financing Fund, which was valued at around £120m before it collapsed in October 2012.

Prosecutors say the fund, which was set up to lend money to law firms pursuing no-win, no-fee claims, made loans only to Schools’ Preston-based ATM Solicitors in 2009, the year it commenced trading.

Co-defendant Richard Emmett, 47, is said to have received just over £1m through his firm Emmetts Solicitors, which later became Ashton Fox Solicitors. The court has previously heard this firm was ‘Emmetts plus ATM’ after it bought the latter at an allegedly ‘inflated’ value of £3.5m in 2011.

Former financial adviser David Kennedy, 69, is accused of receiving over £5m, some of which he is alleged to have used to buy property in the Swiss Alps, as well as in Tenerife and Hull.

Schools and Kennedy are charged with fraudulent trading in relation to The Synergy Solution Limited, which the court previously heard was ‘the first business’ used to authorise Axiom loans.

Schools also faces one count of fraud for allegedly abusing his position as Axiom’s investment manager through his control of Cayman Islands-registered Tangerine Investment Management Limited, by authorising an agreement between Axiom and Ashton Fox for his own personal benefit.

He faces two further counts of fraudulent trading: one for allegedly carrying on the business of ATM Solicitors for a fraudulent purpose and a separate count along with Emmett, both of whom were solicitors at the relevant time, in relation to funds loaned to Emmetts and then Ashton Fox.

In cross-examination at Southwark Crown Court today, Schools was asked about his earlier evidence that he did not respond to any questions from a journalist working for news website Offshore Alert. Prosecutor Miranda Moore QC said Schools had ‘in fact instructed lawyers’ to respond on his behalf, which he accepted.

She suggested to Schools that he ‘could see the writing was on the wall’ and started transferring money – around £1.6m in five days – out of Tangerine Investment Management into a company called Noble Finance, which prosecutors say was his company.

Schools said he did not know ‘whether it was me authorising’ any of those transfers, adding: ‘I don’t accept your other comment about the writing on the wall, it certainly wasn’t on the wall at that stage.’

Moore said that ‘about £5m’ was sent from Tangerine to Noble between the end of July – when he was first contacted by Offshore Alert – and early September 2012.

Referring to subsequent payments from Noble to companies said to be linked to Schools, she suggested that he was ‘getting your money out because there had not just been a sniff of a scandal, it was all coming on top’. Schools responded: ‘My whole motivation at the end was to find some method by which we could save the fund.’

Moore concluded: ‘You are not telling the truth – this was you hiding the ill-gotten gains.’ Schools replied: ‘No, not at all. They were not ill-gotten and I had no involvement in those transfers.’

She added: ‘When everything collapsed and there was an asset-tracing exercise, you made it as difficult as possible for anyone to find the money.’ Schools said: ‘Not at all.’

Last week, Schools said that he set up the Axiom fund to fill ‘the big black hole in the market’ after access to legal aid was reduced and earlier this week defended spending £45,000 on a corporate box at Blackpool FC, telling jurors it was a ‘business expense’.

Schools, of Penrith, Cumbria, denies three counts of fraudulent trading, one count of fraud and one count of transferring criminal property.

Emmett, of Grimsargh, Lancashire, denies one count of fraudulent trading and one count of facilitating the acquisition, retention, use or control of criminal property by another.

Kennedy, of Hetton-le-Hole, Tyne and Wear, denies one count of fraudulent trading.