Dame Vera Baird QC will become Victims’ Commissioner in June, tasked with promoting the interests of victims and witnesses, the Ministry of Justice announced.

Baird started out as a criminal barrister and was involved in key civil liberties and protest cases. In 2006 she became a minister in the Labour government and was appointed solicitor general the following year. She is now Police & Crime Commissioner for Northumbria. 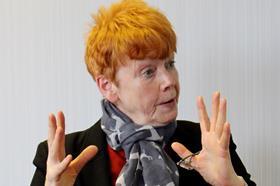 Takes over the role from Baronness Newlove next month

Baird said: 'I will work with government and the criminal justice agencies to implement the Victims’ Code when it has been updated, to bring national guidelines to local victim services which are delivered so well by my colleague police and crime commissioner’s and to make the justice system responsive to victim needs, whilst ensuring fair trials.'

Baird has criticised controversial new forms which ask rape complainants to hand over their mobile devices to the police. 'While we recognise that police must pursue all reasonable lines of inquiry and disclose anything that may undermine the prosecution or assist the defence, this form has been called a digital strip search by campaigners,' she told the Observer.

Her appointment as Victims’ Commissioner will last three years.