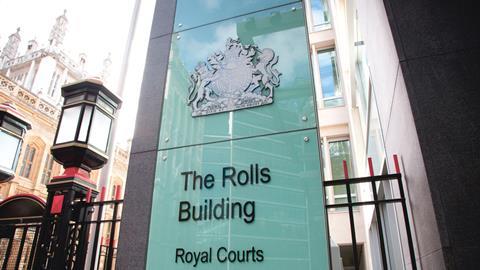 Electronic filing for cases in the Rolls Building in London should become mandatory if not enough parties take it up voluntarily, the Civil Procedure Rule Committee has been advised.

Vannina Ettori, legal adviser to the chancellor of the High Court, said the CE-File Project Board set up to implement the filing system favours making it mandatory for all users.

E-filing has been subject to a voluntary trial in the Technology and Construction Court since April, with the scheme extended to all courts in the Rolls Building from this week.

In a paper presented to the Civil Procedure Rule Committee in October, published last week, Ettori said the voluntary pilot had been ‘satisfactory’ enough to test in other courts.

But data from Thomson Reuters confirmed that uptake in jurisdictions where use of such systems had not been mandated had stalled at 30%.

She said: ‘The system is hugely beneficial and cost saving for HMCTS – it provides with the click of a button statistics and management information about the work of the courts that otherwise would have to be compiled manually over many hours, incurring staff costs, and incorporating errors and uncertainties.

‘It streamlines the filing process and modernises it, allowing parties to file online 24 hours a day seven days a week, and therefore greatly reduces the time spent by staff manning the counters at the Rolls Building reception.’

Ettori said the CE-File board has considered the effect of mandating the system on litigants in person, with one possibility being to make the system mandatory for solicitors and barristers but not for LiPs.

Another option may be to provide access to online filing through a terminal at the Rolls Building or – for a small fee – offering to create electronic files from a paper file provided by the litigant.

A report on the success of the test scheme and any possible amendments will be submitted by April 2016.