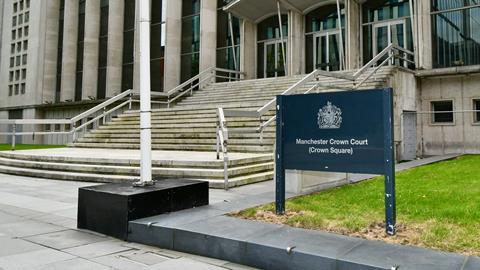 A busy city centre court will be closed for at least two weeks while specialists test the building for asbestos.

Manchester Crown Court (Crown Square) was closed at the end of last week due to what HM Courts & Tribunals Service described as a ‘building issue’. The initial five-day closure forecast was upgraded to two weeks in an update this afternoon.

It is understood that a routine asbestos survey at the building, which dates back to the 1960s, identified a need for further tests and prompted the immediate closure. So far, tests completed at the site have confirmed there is no presence of airborne asbestos particles but further checks are ongoing.

All urgent cases are being heard in Manchester’s Minshull Street Court or Bolton Crown Court, with trials moved wherever possible. The Manchester Evening News reports that one of the cases potentially affected could involve former Manchester United player Ryan Giggs, who is scheduled to stand trial at the court from next Monday accused of controlling behaviour and assault (he denies all allegations).

It is only three weeks since Bolton Crown Court was closed amid fears about safety in the building, with local media saying there was a risk of new lights coming loose and falling. Cases were adjourned while maintenance work was carried out.

As well as building issues, criminal work has also been affected by the ongoing action taken by barristers protesting about legal aid rates.

Last month, the Gazette revealed that 111 sitting days were lost in the first six months of this year due to ongoing repair work in Crown courts in England and Wales. In total, 78 of the 84 Crown court buildings within the HMCTS estate had a repair request that had yet to be completed – with an average cost of £455,000 for each job.

The Ministry of Justice states that across the estate it spent more than £100m on court maintenance and repairs last year and has a further £70m earmarked this year to get courtrooms operating at full capacity. Spending is prioritised to ensure buildings are safe, secure and meet statutory requirements, with the MoJ working closely with the local judiciary and court staff to identify and address areas with the most urgent need.