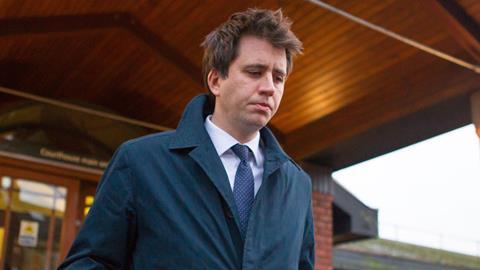 A solicitor convicted of racially aggravated assault can expect to face disciplinary proceedings once he has been sentenced. Alastair Main, 35, was also found guilty of a charge of sexual assault at Wimbledon Magistrates’ Court.

Main, listed on the Find a Solicitor website as an in-house lawyer with City firm Schroders, was charged following events at a London rowing club dinner in December 2015.

It was reported he poured beer over a woman, called her a slut and made reference to her nationality, after she refused to give him a hug.

Main, from Kingston-upon-Thames, then followed her into the ladies’ toilets where he smacked her five times on the backside.

District Judge Barbara Barnes told him: ‘I have to say I did not find you to be a credible or convincing witness.

‘You admit you were drunk. You admit being at various times angry, upset, confused, apprehensive. Your memory of the events of that night may have been affected by the amount of alcohol you had.

‘You admit also you followed [the victim] to the ladies’ toilets. I do not find it plausible that this pursuit by you was just an effort to sort things out.’

The Solicitors Regulation Authority has confirmed it is aware of Main’s conviction and it will await the conclusion of criminal proceedings before deciding on a course of action. All solicitors have an obligation to inform the regulator if they have been charged with an indictable offence.

Sentencing is due on 26 January.

Main was admitted as a solicitor in October 2007 and specialises in corporate finance and financial services.

A spokesperson for Schroders said: ‘We can confirm that Mr Main is currently an employee of Schroders. We don’t comment on our employees’ personal lives.’