'Claims R Us' portal could transform civil justice, says master of the rolls

A digital triage portal for all civil justice claims could help England and Wales become the ‘first major economy’ to make the wholesale transition to online dispute resolution. That is the bold ambition of Sir Geoffrey Vos, master of the rolls, who declared last night that Covid-19 ‘will be seen to have changed our justice system forever’.

Vos was speaking at a City of London Corporation seminar titled ‘Online Justice after the pandemic’, at which he gave an update on plans for the vast bulk of cases to be dealt with out of court.

By mid-2021, Vos noted, district and circuit judges were resolving 80% of civil claims in remote video hearings, leaving only longer hearings over two hours to be dealt with face to face. This was a ‘great achievement’, he declared, saving costs, expenses and time ‘for lawyers, parties and witnesses alike’.

More than half of all small claims dealt with in the county court are worth under £500, Vos noted. That underlined the need for civil justice to become even ‘more agile and streamlined’. 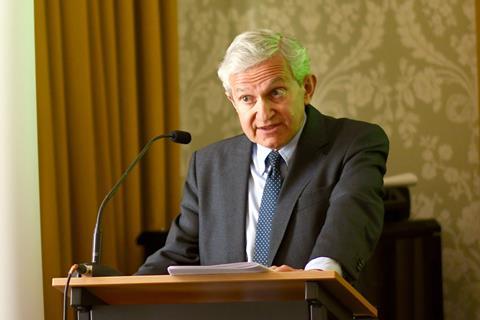 Vos: Covid-19 ‘will be seen to have changed our justice system forever’

The first layer would be a website regulated by a new online rules committee to which any potential claimant – ‘individual, consumer, employee, spouse, SME or big business - can go.

‘We can call it “Claims R Us” for the sake of argument,’ said Vos. ‘It will direct anybody to the right online location to resolve their dispute, whether that’s a court, an [ombuds] process [or] a pre-action portal.’

The second layer would comprise a series of online pre-action protocols aimed at resolving disputes of various types without court-based litigation. Many already exist, Vos noted. The whiplash portal has already dealt with 60,000 cases since it went live last May.

‘In the end there will literally be 50 or a hundred online pre-action portals aimed at one thing – not dispute, but resolution.’

The new systems HMCTS is building are ‘user-friendly and highly intuitive’, Vos said, though he conceded there will need to be support for the vulnerable and digitally unskilled.

Vos also addressed ‘what decision-making should look like’ in the online world. Small claimants should be encouraged into mediation and, if that fails, have their cases resolved by the judge on the documents to save court time, he said.