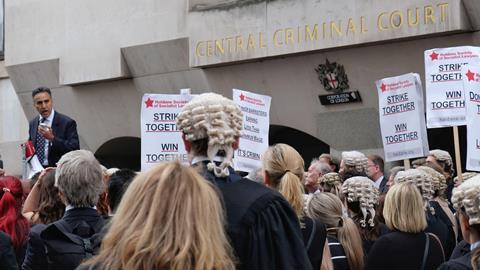 Court staff have been asked to report the names of counsel who do not attend owing to strike action among data to be sent to the lord chancellor, the Gazette has learned.

Email correspondence seen by the Gazette states that all Crown court clerks have been asked to record daily data regarding non-attendance, with forms to be submitted by 2pm each day.

The request follows guidance issued by the lord chief justice that potential disciplinary infractions should be reported to the senior presiding judge rather than being dealt with locally or direct to the Bar Standards Board.

The email states that 'data in the forms is going to the deputy prime minister', Dominic Raab MP - who criticised the strike yesterday.

Names are separately being sent to the senior presiding judge: '[the] purpose of this return is to provide [senior presiding judge’s] office with details of counsel not attending court hearings on Monday 27th June and Tuesday 28th June, irrespective of whether or they have sent a letter in advance to the court to advise of non-attendance,' the email states.

The email, dated 27 June, follows earlier correspondence noting that where defence counsel did not attend court owing to strike action, judges were told to ask defendants two questions; first, whether counsel’s non-attendance had been discussed with the client, and second, whether they had agreed to it.

The answer to both questions, the name of the case and counsel, were to be reported and noted on the court log. The guidance also clarified that cases where CBA action had been reported to the court should remain listed.

The email further restates earlier guidance that 'it will be a matter for the CPS in each case, to decide whether to make an application for wasted costs'. It added that 'cases in which there is non-attendance should be referred to the [presiding judge’s office] to consider whether to involve the BSB'.

Detailed supporting guidance issued by HMCTS was also attached to the email, setting out the ballot outcome, the dates of the action, what staff should expect, and how to react in specific scenarios, such as where no contact with the court was made, applications for adjournment, and notes from counsel stating their non-attendance owing to the days of action.

The guidance also states: 'Counsel may seek verbal feedback from staff on the response of the judge, or any comments made by the judge when considering the application,' adding that 'it is very important that no information is passed on other than that specifically directed by the judge.'

The guidance adds that court staff should 'not become involved in the dispute by what they say or do. This includes publicly expressing any opinion on this dispute,' making it clear that any disruption should be minimised.

While the collation of data on the impact of strike action is not exceptional, the level of detail of data collected will concern those involved in the dispute. However a spokesperson for the judiciary said: 'Data collected by court staff on behalf of judges is not made available to the government.'

An MoJ spokesperson said:  'No names of barristers taking part in strike action are being provided to the Ministry of Justice. We are monitoring the number of disrupted cases due to strike action by the Criminal Bar Association to assess the impact on the justice system.'