The number of disputes relating to climate change has more than doubled over the past five years, as claimants pursue governments for breaking green commitments and breaching human rights, a study by the London School of Economics has found.

A report on trends in climate litigation found that 834 climate cases were filed globally between 1986 and 2014, while more than 1,000 cases have been brought since 2015, in the wake of the Paris Agreement. The majority of these have been filed in the United States, however the UK has seen 73 cases and Australia has dealt with 115.

Most cases have been brought against governments – typically by corporations, non-governmental organisations and individuals – and have focused on compliance with climate commitments, human rights and the financial risk of climate change, the LSE’s Grantham Research Institute on Climate Change and the Environment said.

‘We expect that climate change litigation will continue to grow, reflecting the increasing urgency with which the climate crisis is viewed by the general public,’ the report concluded. ‘We also expect the range of claims and defendants to continue to diversify, reflecting an increased understanding of the role that multiple actors will need to play in the transition to a net-zero global economy. In particular, it is likely that more litigation will be brought against financial market actors.’ 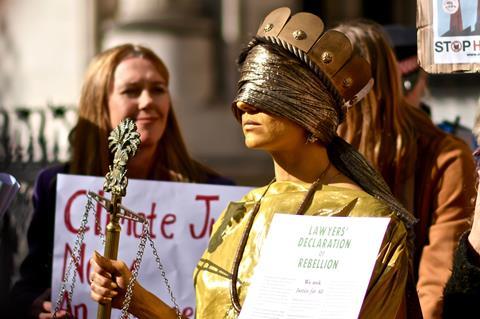 Over 1,000 climate change cases have been brought globally since 2015

A review of all decided cases in the LSE database found that cases with outcomes ‘favourable’ to climate action are in the majority. 58% of cases had outcomes favourable to climate change action, while 32% had unfavourable outcomes, and 10% had no discernible likely impact on climate policy, it said.

However, speaking at a recent webinar on the climate litigation report, James Maurici QC said that judicial reviews brought in the UK relating to climate change – such as Friends of the Earth v Heathrow Airport – have largely failed.

Maurici flagged the difficulty of invoking the Paris Agreement in the UK court system and in domestic courts more generally. ‘Recent case law perhaps suggests that there is quite a hostile environment at the moment for running these kinds of point. And what claimants seem to be doing is just re-arguing the same points,' he said.