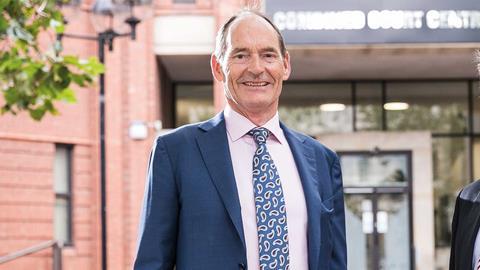 A Hull solicitor and former criminal defence chief retiring after four decades has been given a special send-off: a Crown court valedictory.

According to the Hull Daily Mail, judge John Thackray QC told a farewell gathering at Hull Crown Court that Bill Waddington was a ‘legal legend’ and so liked and respected by his clients that two of them had his name tattooed on their body.

‘He was hugely liked among criminal defence lawyers in the length and breadth of Britain,’ the judge added. ‘He always had a smile on his face, although often a wry smile. Defence barristers owe him a huge debt of gratitude.’

He was a commissioner on the Bach Commission on Access to Justice and more recently a member of the expert and advisory panel for the government-commissioned criminal legal aid review led by Sir Christopher Bellamy QC. He is also a member of the Law Society's criminal law committee and a council member.

Lovely valedictory this morning led by the Recorder of Hull for our former Chair Bill Waddington @bill_wow . Reflected the great affection and esteem in which Bill is held both locally and nationally. A Crown Court valedictory is an honour rarely accorded to Solicitors.

Former CLSA vice-chair Robin Murray said: ‘It was a great honour to be a small part of the valedictory of [Bill] today on remote at Hull Crown Court upon his retirement. Bill was a great general of the solicitors profession and we owe him a huge debt of gratitude for his service as [CLSA] chair.’

Waddington received a Legal Aid Lawyer of the Year award in 2015 and was shortlisted for a Law Society Gazette legal personality of the year awards at the Law Society's excellence awards the same year.