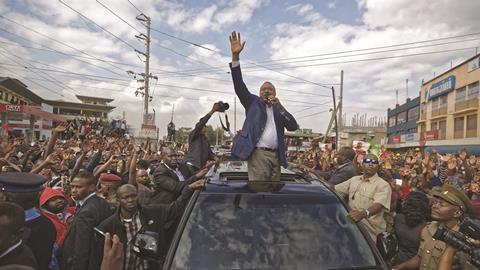 Kenyan judges made history today by ordering the re-run of last month’s presidential election - the first time a court has made such a ruling in Africa. In a majority decision, the six-judge bench of Kenya’s Supreme Court nullified the re-election of President Uhuru Kenyatta on the ground that it was not conducted in accordance to the dictates of the constitution. It ordered a new poll within 60 days.

Addressing the nation, President Kenyatta said he personally disagrees with the decision ’but accepts and respects it’.

The court was ruling on a petition by opposition leader Raila Odinga that there was massive, systemic, systematic and deliberate non-compliance with the constitution during the election. Allegations included:

James Orengo, of Nairobi firm JAB Orengo Advocates, who represented the petitioners, said: 'The decision is history. The Supreme Court has done Kenya proud and lived up to the principle of law regarding elections.'

Adam Colenso, partner at City firm Wedlake Bell, which was consulted by the petitioners, described the ruling as ’a momentous development of the rule of law in Africa giving encouragement across the continent to the idea that irregularities in elections can be successfully challenged in courtrooms’.

Colenso noted the speed with which the court was able to rule on the petition. ’In the UK the process of preparing an election challenge for the court to hear would take much longer and there would have to be full disclosure of all relevant documents and computer records.’