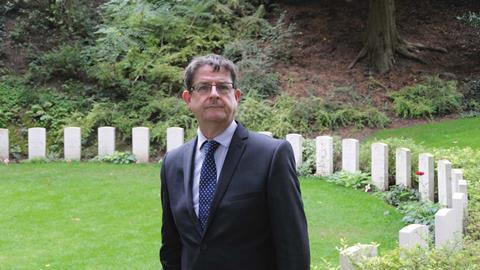 Andrew Caplen, president of the Law Society, lays a wreath at the Ypres grave of one of the first of the 900 solicitors and articled clerks to be killed on active service in the first world war.

Cyril Montagu Pope, articled to R.B. Pope of Brighton, was mobilised in August 1914 as a lieutenant in the Worcestershire Regiment. He died of wounds at the age of 26 on 24 October 1914, during the first battle of Ypres. Also killed in that battle was Denys Alfred Ainslie, articled to his father William Langstaff Ainslie, of Harrow, Middlesex. His body was not recovered.

Their names inaugurated the Gazette’s ‘Roll of Honour’, which appeared in every month’s edition for more than four years.

Click here to view more photos from the President's visit to Belgium.