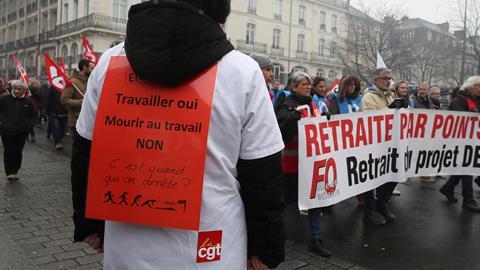 France’s 70,000 practising lawyers are set to join the national wave of protest over pensions with a week-long ‘hard strike’ from next Monday. National representative body the Conseil Nationale des Barreaux (CNB) called on professionals to 'cease all judicial activity, whether criminal, civil or administrative'.

France has been rocked by protests over President Macron's proposal to replace 42 separate pension regimes with a universal points-based system which critics say will force employees to retire later or face pension cuts.

According to a joint statement by the CNB, the Conference of Baton-holders and the Paris Bar, 'the government remains deaf to the plight of lawyers', and pays attention only to protests that bring the country to a halt. As a result, the legal profession has no choice but to tighten the grip of the strike. 'By refusing any dialogue, the government bears sole responsibility for the consequences of this movement on the functioning of justice and on the rights of citizens,' the statement continues.

The week-long strike will begin on 6 January and may be renewed. Each local association may adopt or supplement actions from a list proposed by the CNB. 'All lawyers in France are also called upon to actions aimed at defeating the government's reform project'.