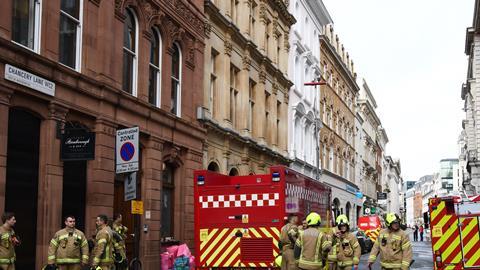 A serious fire caused the evacuation of the Law Society's headquarters at 113 and 114 Chancery Lane during an event on Saturday night. With the building remaining closed, disaster recovery procedures have been activated.

The Gazette was able to publish normally on Monday.

Law Society chief executive Paul Tennant said: 'First of all I wanted to express my gratitude to the fire service and my relief that nobody has been hurt. I also want to express my sympathy to the residents in the Chancery Lane area whom I understand may have had to evacuate their homes. 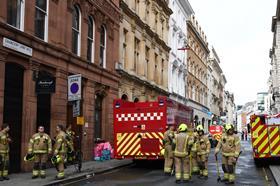 'It is too early to comment on the cause of the fire or the extent of the damage but clearly we are extremely upset that this has happened to this wonderful and historic building.

'When the fire alarm sounded on Saturday night an event had been taking place. An evacuation ensued and I’d like to praise our on-site staff and others for their calm response. We will release more information as it emerges in due course.'

Witnesses said the fire alarm was sounded during a Junior Lawyers Division event.

A London Fire Brigade statement said that 25 appliances and 150 firefighters attended. 'The roof of the six-storey building and a staircase from the third to the fifth floor were destroyed by the fire. Half of the third and fourth floor were also damaged. Around 28 people left the building before the brigade arrived and 11 people were evacuated from nearby flats as a precaution. There were no reports of any injuries.

'Aerial ladder platforms and turntable ladders were used to tackle the fire in the roof from height.'

Around 100 firefighters continue to tackle a fire in an office building in Chancery Lane in #Holborn https://t.co/lI1PiQQL6c pic.twitter.com/uJbX1ZBEnJ

Assistant commissioner Dom Ellis said: 'This was a very complex fire due to the age and layout of the building. Firefighters worked throughout the night in very challenging and arduous conditions to prevent the fire from spreading to key areas of the historic building, while also trying to prevent water damage.

'They will remain on scene throughout the day damping down and cutting away. There will also be on-going salvage work to minimise damage to the building.'

According to the statement, the brigade was called at 2240 on Saturday and the fire was under control by 0948 on Sunday, but crews will remain on scene throughout the day. Fire crews from Soho, Dowgate, Euston,Islington, Lambeth, Whitechapel, Paddington, Shoreditch, Shadwell and Old Kent Road fire stations were at the scene.

The fire in #Holborn is now under control, but crews will remain on scene throughout the day damping down and carrying out salvage work to minimise damage to the building. Thankfully, there are no reports of any injuries. Road closures remain in place https://t.co/lI1PiQQL6cpic.twitter.com/cagmfqTwnb

Update 1200 Monday: A Law Society spokesperson has confirmed that the fire was contained and did not spread to the historic part of the building housing the library, reading room and common room. However the building remains closed today.