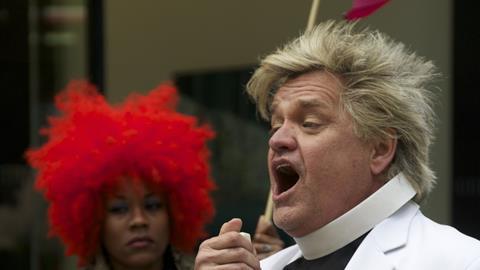 International law firm King & Spalding was the subject of a ‘corporate exorcism’ yesterday afternoon, complete with a US choir and ‘preacher’.

King & Spalding is currently representing outsourcer Veolia in a case against the Egyptian government for increasing the minimum wage.

Campaign group Global Justice Now singled out the firm for its advice to clients in such court cases against national governments, brought through the investor protection mechanisms in bilateral trade treaties.

While Global Justice Now is critical of the firm's decision to act on such cases, its head of policy and campaigns Polly Jones told the Gazette: ‘The real target is the ISDS [investor-state dispute settlement mechanism].’

It also aimed to highlight opposition to the planned trade treaty the Transatlantic Trade and Investment Partnership (TTIP), the ‘state dispute clauses’ of which ‘threatened people’s equality and rights in the UK’.

The 20-minute exorcism, carried out by US-based performance activists ‘Reverend Billy and the Stop Shopping Choir’, attracted passing City workers, who listened to the ‘preacher’ and choir, took pictures with their phones and tablets, and chatted with the handful of Global Justice campaigners.

Some employees at 125 Broadgate Street, also home to other law firms, watched from the windows of the upper stories.