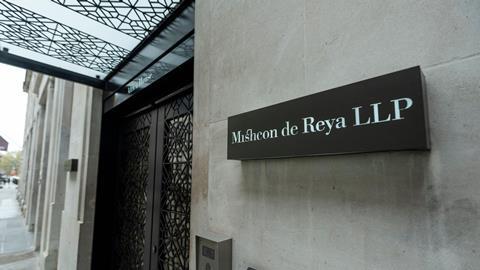 London firm Mishcon de Reya has failed with an attempt to fend off a full tribunal hearing by making a last-ditch admission to running a banking facility through its client account. The firm submitted a proposed statement of facts and admissions to the Solicitors Regulation Authority at 5pm yesterday, on the eve of a four-day hearing at the Solicitors Disciplinary Tribunal beginning today into allegations that the firm's client account was used as a banking facility.

But the attempt to make admissions at this late stage, although accepted by the SRA, was opposed by lawyers acting for a second respondent in the case, the former Mishcon partner Elizabeth Ellen. If the tribunal were to proceed with the SRA’s proposal to accept Mishcon’s admissions, Ellen would have effectively then faced the remainder of the hearing as the only respondent who denied wrongdoing.

Andrew Spooner, chair of the tribunal panel, acknowledged that the admission could be accepted in principle but said Ellen had been 'effectively ambushed' by the lateness of it being made.

Following a morning of submissions by all parties, the tribunal opted to proceed with a full hearing and not accept the Mishcon admissions. Spooner said the firm had 'plenty of time' for discussions and agreements to take place at a much earlier stage, and that an application made the day before a hearing without notifying Ellen was 'unfair' and 'potentially prejudicial' to her.

Richard Coleman QC, for Ellen, said that it was denied there was a banking facility provided and that even if the tribunal found that there had been, Ellen did not cause it. She was a junior solicitor at the time of the five relevant transactions in 2011 and submits it was the duty of the partners at the time of the alleged transactions to authorise any client account breaches.

‘This is an inappropriate proposal which should be given very short shrift and should be dismissed,’ said Coleman, who added it would rise to inconsistent findings and required the tribunal to ignore relevant findings when sanctioning the firm.

He said that the firm had not provided any training in accounts rules compliance and that the SRA had made no attempt to investigate anyone else more senior to Ellen. Coleman also stated that senior partners with Mishcon had declined to give evidence and could not be cross-examined as part of Ellen’s defence.

Chloe Carpenter QC, for Mishcon de Reya, said the firm had been ‘scrupulously fair’ to Ellen, naming her as little as possible in the proposed statement of facts and admissions and not intending to affect her case.

Carpenter said that the agreement with the SRA was intended to save time and costs for the parties and said the firm had made extensive admissions from an early stage, despite the late submission of yesterday’s papers.

‘This the earliest this document could have been produced as it has not been agreed until now,’ added Carpenter. ‘That unfortunately is the situation. I don’t accept any criticisms of the firm in that regard.’