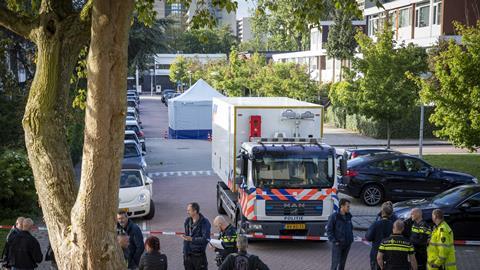 Flags at law firms across the Netherlands are flying at half mast today following the murder of a lawyer on an Amsterdam street. Derk Wiersum, 44, who had been acting for a prosecution witness in a gangster murder trial, was standing next to his wife when he was gunned down in Amsterdam Zuid.

In a statement, the Netherlands Order of Advocates said: 'NOvA is shocked that lawyer Derk Wiersum has been murdered in the performance of his duties. It is unimaginable and deeply tragic that a lawyer, husband and father has been murdered just because he is doing his job. The rule of law has been violated today.'

Netherlands bar chief Johan Rijlaarsdam said: 'If a lawyer is killed because of the work he does, it is an attack on the rule of law. Lawyers must be able to do their work in complete freedom and safety.'.

Wiersum was a specialist in serious and organized crime. He had received death threats after acting for a witness identified as 'Nabil B' in a case concerning gangland assassinations.

Pictured above: Police at the site of the shooting in Buitenveldert
Image credit: Michel van Bergen/EPA-EFE/Shutterstock