A group of Turkish lawyers in exile following the aftermath of last summer’s attempted coup is using the country's Lawyers Day to publicise what it says is the full scale of the government's clampdown on the profession. According to the Arrested Lawyers Initiative, 370 lawyers are behind bars in Turkey and 967 are under investigation.

The group is urging colleagues to tweet with the hashtag #FreeTurkishLawyers today, 5 April. 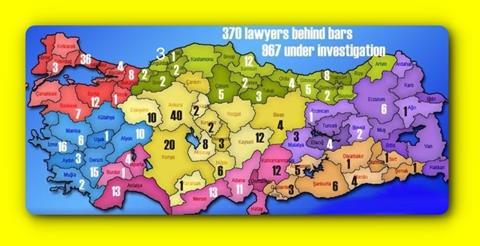 According to the group, the legal profession in Turkey is 'appalled by the ruthless targeting of lawyers by the government in the wake of the failed coup'. To date, 4,088 judges and prosecutors have been suspended and at least 149 public attorneys and legal advisers and 108 law school academics have been dismissed under emergency decrees.

The Turkish government has also targeted lawyers' right to association, with 30 law societies or associations shut down since the declaration of the state of emergency, the group says. 'All arrested lawyers face the same accusations of allegedly belonging to a terrorist organisation.' Arrested lawyers are asked to divulge confidential information about their clients, the group states. There have also been reports of torture and ill-treatment by the security forces.

Among the international bodies to protest at the clampdown is the Law Society of England and Wales.

The Arrested Lawyers Initiative says: 'We seek the support and solidarity of lawyers, other human rights defenders and advocacy groups and free media outlets worldwide in the hope that a concerted effort (like writing a letter to the Turkish authorities) may help bring an end to persecution of lawyers by the Turkish government and even bring about the release of our unlawfully arrested colleagues.'

For more information on the Arrested Lawyers Initiative see https://twitter.com/Av_EvrenSEL.