HM Courts & Tribunals Service has found £5m to deal urgently with a spate of reports of 'minor but irritating' faults in the courts estate, the lord chief justice revealed this morning. In his first press conference since being sworn in, the Rt. Hon. Lord Burnett of Maldon also warned of 'a growing number of cases where judges are threatened and physically abused' - and said that litigants in person 'do not necessarily clog up the courts'. 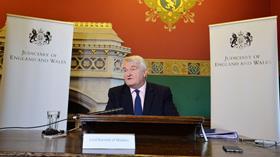 Answering a question prompted by a series of Gazette reports about faults in the courts estate, Burnett agreed that some buildings were in 'a dreadful condition'. In the past, he noted, budgets allocated to court repairs had not been spent. However he said that HM Courts & Tribunals Service is now ensuring that 'every penny of the budget allocated for repairs' is being spent in that way. An additional £5m, on top of the courts modernisation fund, has been allocated to deal with urgent problems this financial year, he said.

Burnett denied that the soaring number of unrepresented parties would cause the courts system to collapse, saying that judges were able to cope. 'We have quite a lot of evidence, anecdotal evidence, that litigants in person do not necessarily clog up the courts,' he said. 'Some shorten cases, some lengthen cases.' However he added that 'as a general rule' professional representation should be available.

He declined to comment on the wider question of legal aid, but said the judiciary would respond to the government's assessment of the impact of the Legal Aid, Sentencing and Punishment of Offenders Act.

Burnett devoted much of his opening address to concerns about attacks on judges, especially online. While judges should not be immune from criticism 'fair criticism is different from abuse', he said. He referred to cases where 'judges face a torrent of personal abuse for decisions they have made... and a growing number of cases where judges are threatened and physically abused. Such abuse is capable of undermining the rule of law,' he said.

Asked if there was one thing he would like to achieve in post, Burnett said: ’I would like to be seen to have helped improve the morale of the judiciary’.