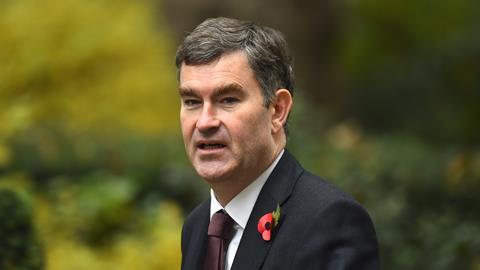 The lack of diversity within senior law firm roles is contributing to fewer women applying to become a judge, the lord chancellor has warned. Addressing a conference on women in the law today, David Gauke pledged to do everything he can to encourage people from across the legal profession, including solicitors, to apply to the judiciary.

The justice secretary praised the progress that the legal profession has made on diversity, but said ‘we can aim for more’. He told the Spark 21 conference, organised by the First 100 Years Project, that figures show the diversity of entrants to the profession is not where the problem lies.

Gauke said: ‘It’s in the senior roles and leadership that gaps appear. When we look at the senior leadership in law firms, while women make up 59% of non-partner solicitors, they account for just a third of partners.

'In the biggest firms that figure falls to just 29%. And while figures at the Bar have been moving in the right direction over the last few years – with a greater proportion of female pupils than males – just 37% of barristers currently practising are women. And just under 15% of Queen’s Counsel are women. That means fewer women in the pipeline of candidates to join the judiciary.’

Gauke stressed that appointing judges by merit is the most important criteria for retaining quality, but said ‘we should remove the barriers to talented women and other under-represented groups applying to join the judiciary’.

Gauke said the government is working with the senior judiciary, Judicial College, Judicial Appointments Commission and legal professional bodies to develop an online learning platform and judge-facilitated discussion groups, which will be unveiled next spring.

The government is also working with the Law Society, which will host a roundtable for senior partners and law firms ‘to explore what support is needed to encourage more solicitors to apply for judicial office’.

However, judicial pay dominated questions for the lord chancellor following his speech.

Recorder and deputy High Court judge Alexandra Marks, a former commissioner at the Judicial Appointments Commission, questioned Gauke on his recent announcement that judges will get a 2% annual pay rise - despite the Senior Salaries Review Board recommending up to a 32% hike.

Marks, a former real estate partner at magic circle firm Linklaters, told Gauke that ‘it is not about the money but about being valued and feeling valued’. The lord chancellor was told that senior practitioners who go to the judiciary ‘almost invariably accept a pay cut’.

Gauke said the 2% pay rise is in response to the SSRB’s 2018/19 annual pay review, which recommended a 2.5% pay rise for public sector workers. The Ministry of Justice will consider recommendations made by the SSRB in a supplementary review of the judicial pay structure.

Gauke told the conference it is important that the judiciary feels valued: ‘We are going to consider the SSRB’s recommendations and look at what we might do in terms of having a remuneration package that does properly value the judiciary and ensures we are attracting a high quality of applicants to those posts in the judiciary.’

He was also questioned by Sarah Langford, a criminal and family barrister, about the government’s commitment to diversity ‘when legal aid pay is so low’.

Gauke said he was conscious of the fact that legal aid support in recent years has been ‘reduced’. Highlighting the government’s efforts to reform Crown court fees for advocates, Gauke said he continues to work with the Bar Council and Criminal Bar Association: ‘I want to make sure we have got a system that properly works. I appreciate there are pressures as a consequence of legal aid and fees.’

Gauke acknowledged that more needs to be done to ensure unsuccessful judicial applicants are not deterred from reapplying. As a former solicitor, he said he knew ‘lots of people I used to work with who would make excellent judges but it does not possibly occur to them that’s the route they should go down.’