No basis exists in jurisprudence or legal philosophy for conducting justice face-to-face in physical premises, one of the architects of the online court told a conference yesterday.

Professor Richard Susskind, IT adviser to the Lord Chief Justice, was defending the online courts programme against what he described as six principal criticisms. Earlier, he had told the Court Excellence and Innovation conference in Dubai that the future of civil justice lies in 'asynchronous' courts in which judges rule on evidence supplied digitally. ‘Online is not an alternative to the courts system, it is the courts system. Within 10 years most cases will be resolved by online courts,’ Susskind said.

Tackling six 'pushbacks' against the Ministry of Justice's online court programme, Susskind said accusations of creating cut-price justice were misplaced. In contrast to today's 'Rolls-Royce system that few are using', the self-service online court would open up a latent market among claimants who today see justice as too slow, costly and antiquated.

He was upbeat over fears about risks to open justice, saying that work is underway to ensure access to proceedings. 'We should be able to make the system more transparent that what we have now.'

Conceding that 'many people feel strongly that justice must be face-to-face', Susskind said he could find 'no principles of justice, jurisprudence or legal philosophy', to justify that position. On the belief that justice should be dispensed in a physical setting: 'We’ve got to test that claim.' Maybe [online] isn’t quite as good, but it's available. I’m seeking improvement, not perfection,’ he said.

Susskind was scathing about fears that the digitally excluded would lose access to justice. When proxy users are taken into account, only 3% of the population are excluded, he said. 'Internet usage is far higher than lawyers, advice workers and judges assume today. We can’t let the tail wag the dog.'

He was equally forthright on claims that online dispute resolution would damage the majesty of the courts. 'I worry a bit about that word. Today we have majestic but rarely used physical courts competing with private sector dispute resolution systems.' 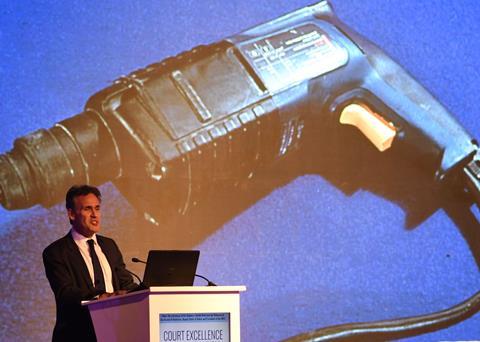 However Susskind made one concession to critics, saying the proposed £25,000 claims value limit for the online court might be too high at first. 'I think we should start low. We have to be nuanced,' he said.

Susskind was addressing a sympathetic audience at an event organised by the International Consortium for Court Excellence, which administers an international framework of standards for court administration. The event heard of several examples of successful online dispute resolution mechanisms, including the Dubai International Financial Centre Courts' Small Claims Tribunal, which hears claims of up to 500,000 UAE dirhams (£104,000).