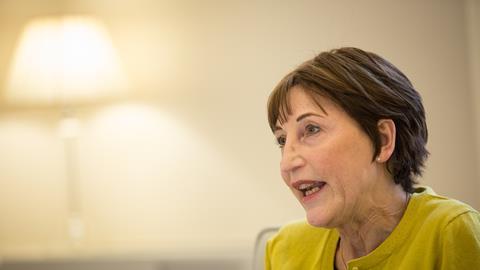 How does one describe Farrer & Co? That question cropped up when Anne-Marie Piper became senior partner in April – the first woman to hold the post in the firm’s 316-year history.

‘Private client’, ‘West End’, or ‘establishment’? None are quite right.

‘Venerable’? Certainly. Farrer & Co can trace its origins to 1701. But the firm’s principal building at 66 Lincoln’s Inn fields, to which it moved in 1790, wears its name lightly. There is no brass plaque, just ‘Farrer & Co’ discreetly imprinted on its letter box.

As is well-known, the firm’s clients include members of the royal family. The challenge for Piper and her partners, as they run the firm and plan for the future, is to reap the benefits of that prestige without being pigeonholed.

That tension was evident in a speech to the Association of Partnership Practitioners earlier this year: ‘For those of you who know of Farrers, you probably think of us as a long-established firm with a prestigious client base, possibly a bit old-fashioned. And, perhaps… you assumed that the majority of our partners were floppy-haired chaps called Rupert or Tristan. I hope to show you how our longstanding firm is also a very modern and varied partnership.’

Piper originally headed for the bar, before her then boyfriend and later husband decided to return to university. One of them had to earn, so Piper took a job in-house at a firm of life and pensions brokers. ‘I really liked the work I was doing on this side of the profession, so I never went back,’ she says.

At that time, City firms had private client departments and Piper eventually progressed to partnership at Richards Butler (which merged with Reed Smith in 2007).

In the late 1980s, however, as the City became focused on corporate transaction and finance work to the exclusion of other areas, private client lost its lustre.

It was then Piper witnessed first hand the staunch loyalty of such clients to their chosen advisers. Some of them remain from her time at Richards Butler, even though her focus is now on charities: ‘They’re quite happy for somebody else to do the work, but they know that I know them,’ she says.

Piper moved to Paisners in 1994, specialising in advice to charities. But a proposed merger with Berwin Leighton seemed set to take the firm in a ‘scarily similar’ corporate direction to that taken by Richards Butler.

Piper says: ‘I resolved that I would join a firm only if at least 15% of turnover [came from] private client and charities… I figured that you don’t quickly shut down 15% of turnover.’

She and her charities team shortlisted and spoke to five firms: ‘We all went out to supper one evening to throw pieces of paper into a hat and decide where we should go, which produced another firm. We all looked at each other, horrified and said, “But we want to go to Farrer!”.’

The ‘sorting hat’ was overruled and the team made the switch to Farrer in 2001.

History looms large in any discussion of Farrer. Choice episodes include: the 1789 prosecution for libel of the editor of The Times, on the instructions of the Duke of York; actions against the dramatist Sheridan for non-payment of bills; the foundation of the Royal Marsden Hospital; and the divorce of one Charles Windsor.

When the UK voted to leave the EU last summer, Piper reflects, ‘we were all in a state of shock. There were groups of staff in tears, because you couldn’t quite believe it had happened’.

Her pep talk drew on history in a way that few other firms could: ‘We were able to sit people down and say, “Look, we survived the French Revolution, we survived the first world war, the second world war. The business is strong and stable.”’

Piper is otherwise circumspect about the importance of the firm’s past to its future. ‘We’ve just completed a business development review, where we spoke to clients and intermediaries [asking] what matters to them,’ she says. ‘Some liked the “heritage” aspect, but for a large number they were neutral at best.’

Within the firm, heritage is ‘terribly important… the whole ethos is one of stewardship… leaving the business in better shape than you found it’. Piper adds: ‘If heritage doesn’t appeal [externally], what clearly captures the zeitgeist is the idea that we’re a very sustainable business. We do things our own way and, actually, we’ve been around a long time so we’re doing something right.’

And the firm has hardly stood still since 1790: ‘Everybody loves “66”. It feels very much at the heart of the firm,’ Piper notes. But with a headcount of 400-plus, most staffers now work from overspill buildings around the square and on neighbouring Kingsway. ‘We masquerade as a smaller firm,’ is how Piper puts it.

Farrer’s client base is broader than one might suppose, too. ‘At the heart of our business is private client, but if you look at the specialisms we have, essentially they’re like “petals” on that private client “flower”,’ she explains. ‘Private clients have businesses, they invest, they own property. They use private banks. They are involved in philanthropy. And then [there are] our dispute colleagues, our matrimonial colleagues – we grow the business from its core. As private clients go into different things, so do we.’

Consider fellow partner David Smellie’s sabbatical. He spent a few months teaching history and rugby. On his return, with insight into the way organisations must approach safeguarding, he started the firm’s child protection unit, which advises a much wider range of clients than its previous public school staple.

This, Piper notes, shows that the firm has an entrepreneurial streak: ‘We have bright people who watch what’s going on in the world. We’re not the sort of firm that makes it terribly difficult to do things. People get an awful lot of individual freedom in their practice, provided it makes business sense.’

At Farrer & Co, the senior management all continue to practise.

In Piper’s own charity sector, she notes that clients face significant challenges. ‘Charities are really at a disadvantage when it comes to the law,’ she notes. ‘If you think about a new piece of banking law, the banking firms will throw their in-house lawyers at it. They’ll go to their magic circle [firm], they’ll bring in high-class PR.’

By contrast, Piper adds: ‘Charities [don’t] have that facility to throw large amounts of money at lawyers.’ Those involved in the Charity Law Association, including lawyers at Farrer & Co, volunteer their time to scrutinise changes to the law. Additional headaches arise from the fact that the impact on charities may be a by-product of legislation aimed at other sectors. Her clients include Age UK.

Government cuts have also had an adverse effect, Piper says, particularly on regulator the Charity Commission.’

As senior partner, Piper describes her role as the ‘partner for difficult conversations’. This often fell to her regardless, before her election, as a member of the management board. ‘Perhaps it’s a female style,’ she reflects, ‘but I’ve always thought issues are better tackled than dodged. Lawyers can sometimes be a bit conflict-averse. I think as a woman, you don’t see that you have to have a conflict. You can [see] a conversation out of which change can happen.’

Piper can find herself conversing with colleagues about everything from stress and mental health, to the cost of childcare and property. She notes that, whereas she had a 20-minute journey from Camberwell to Richards Butler when her children were young, lawyers now reaching that stage are likely to be an hour from home. Farrer’s response, in part, is a culture of agile working, taken up by 25% of the firm.

On mental health, she says: ‘What we wanted to do was to create a culture in which people felt able to talk, if they had those mental health issues.

‘We have a conference each year for partners, for fee-earners and for business services staff. When we first rolled out our wellbeing programme, one of our very senior partners took to the stage,’ she says. ‘He spoke to all of them about the stress he encountered when he had been ill for a time and had come back to work.’

On gender, Farrer & Co performs relatively well. Well over a third of the partnership are women. There are, in fact, no Ruperts or Tristans among the firm’s 210 solicitors – but Piper acknowledges that the firm needs to do better on other diversity measures.

Does she accept that she is now an exemplar for others to emulate? ‘One of the things that a number of people have said to me is, “We’re so glad you’re a senior partner, because it’s good to have a woman as a role model.” That both delights me and saddens me in fairly equal measure. I just looked at the sort of lawyers that I thought I would like to be and they weren’t female, but I don’t think that mattered – there weren’t many women around to inspire, or in whose paths to follow.’

Piper sees a bright future for a ‘traditional’ firm like Farrer & Co; and in some respects a more stable future than that faced by much larger firms. ‘I think the profession is going to change quite dramatically in the next 25 years, as artificial intelligence comes online,’ she says.

‘This is going to be particularly relevant for firms that do similar transactions over and over again. At the end of the day, the role we play with many of our clients is that of trusted adviser. And that’s not about artificial intelligence – it’s about judgement.’