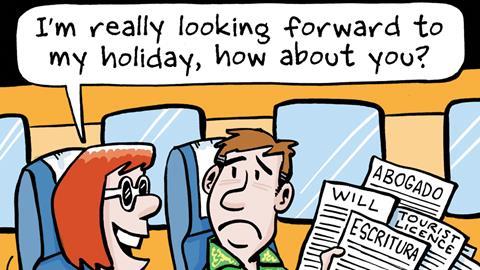 District Judge Suzanne Stephenson on dealing with the complexities of Spanish property law.

I have recently had a holiday in my apartment on a well-known Spanish island. A close member of my family runs a holiday cottage and camping site in England. This got me thinking about the different legal regimes.

Starting with the English holiday business, land and barns were purchased along with a house for the family to occupy. Planning permission was then obtained to convert a barn to a holiday cottage.

It was a bit convoluted because a ‘bat and owl’ survey was required and the needs of bats, owls, birds and other flora and fauna had to be dealt with in an environmental plan. The electricity provider needed a few telephone calls and agreement to pay money to upgrade the power supply to the holiday accommodation. When everything was finished and the building inspector pronounced he was satisfied, a rateable value was placed on the cottage and the campsite – and they became subject to business rates.

The legalities involved a good conveyancing solicitor on the original purchase and an architect/surveyor to advise on planning law. You can probably tell this was all not without its complexities. So what, then, of owning a holiday home on a Spanish island?

In 1970, my parents decided to buy the apartment. In early 1971 they visited the island and, having been conducted around the island by an English estate agent with offices overseas, they made their choice. Fortunately, they had the good sense to ask for details of local lawyers and hired an abogado. Nowadays we have the benefit of the internet, and anyone considering buying Spanish property should read the information on the Foreign & Commonwealth Office website. The site explains how to check your abogado is suitably qualified. As you might expect, your lawyer will have to undertake a number of searches for you before you part with your money.

When my parents bought the property my mother, who was the actual purchaser, obtained a fiscal number but she was greatly concerned about the delay in obtaining the escritura. The only way I can describe a fiscal number is that it is a bit like a national insurance number. You need it to secure services such as water or electricity. The escritura is essentially the full title deeds.

Although Spain has a land registry, it is not identical to the English Land Registry. However an owner should be in possession of a nota simple, which is a type of abstract of title. If the property is a flat or part of a complex there will be a Community of Properties with a president. This will look after common parts, such as communal stairwells and gardens, and will issue yearly maintenance charges. In the same way as leasehold premises in the UK can have arrears of service charges, it is important to make sure your Spanish property has no such arrears.

Just as we might sensibly be expected to take a modicum of care when purchasing a property in the UK, the same approach should be adopted when purchasing your holiday home in Spain. You should check, via your advisers, that the house or flat is not in a coastal demarcation area where building is limited or forbidden. If you plan to buy a property with the intention of covering expenses by letting it out you will need to make sure there is a tourist licence.

The rules for obtaining such licences vary from region to region, but the penalties for letting without a licence can be fines of up to €30,000.

Owning property in Spain does not come without expenses. You may have service charges. Even if you are not letting out your property there is a need to do an income tax return, generally combined with the return for the wealth tax or Patrimonio. My Spanish lawyer does this for me, but there is of course her bill! You may decide to engage a management company to look after your property.

I did not buy my flat in Spain; I inherited it. Under Spanish law, your property will be inherited by the heirs of your estate according to the laws of your country of origin. In some circumstances, you may be advised to make a Spanish will, but you will need to make sure it does not revoke your English will.

A high degree of professional advice is needed in both jurisdictions to prevent unintended consequences. My late mother made a Spanish will. She mentioned to me that I would inherit the flat but ‘your father will be able to use it too’. When she died in 1997 it transpired that she had created a usufruct, or life tenancy, to my father. This might have been a tax-efficient option if the flat had been a high-value property, but in 1997 the value was very modest and my father was already 77 and his wish to use the flat, let alone maintain and administer it, was beginning to wane.

Thus, when he died in early 2013, the flat had to go through probate all over again.

A further unintended consequence was that the utility bills were not in my name. My father originally had a joint bank account with my mother. My name was added to the account, but after his death it had to be closed and replaced by an account in my name at the insistence of the bank. It has since required the production of a copy of the title deeds to facilitate an electricity account in my name. My recent holidays in Spain have included ‘fun’ visits to the bank, the electricity company and my abogado.

Are there any lessons to be learned? I have written this article from my experiences rather from any specialist training or knowledge. As a district judge, I would like to think I have a wealth of legal knowledge, but Spanish property law and taxation are outside my fields of expertise.

Anyone contemplating purchasing a holiday home should undertake a great deal of research and make sure they have a competent lawyer from the particular jurisdiction.