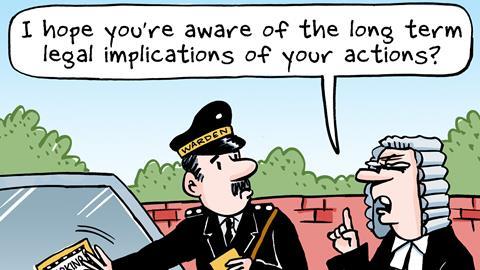 Graham Green considers the far-reaching repercussions of a parking ticket.

In April 2013, a Mr Barry Beavis visited the Riverside Retail Park in Chelmsford. Its car park is one of many operated by ParkingEye Limited, the UK’s biggest private parking company. Sadly, Beavis overstayed a two-hour limit at the car park and received a demand for an initial £85 charge.

He considered that the charge was a ‘penalty’, as the company could not possibly have suffered a loss in that sum as a result of him outstaying his welcome in the car park – and decided to mount a legal challenge to it.

He was not the only motorist who felt sufficiently aggrieved by the company’s scale of charges to involve the courts. Accordingly, although a claim of this size would normally have been dealt with by a district judge under the small-claims procedure, it was directed that HHJ Moloney QC, the designated civil judge for East Anglia, would hear the claim.

Judge Moloney found for ParkingEye and Beavis appealed. Before the Court of Appeal only two of the arguments raised at first instance were aired again: whether the charge is unenforceable at common law because it is a penalty; and whether it is unfair and therefore unenforceable by virtue of the Unfair Terms in Consumer Contracts Regulations 1999 (the regulations). The Consumers Association was permitted to intervene before that tribunal.

The argument based on the regulations got short shrift. Lord Justice Moore-Bick had ‘no doubt that a term which entitles the operator of a car park to recover disproportionately high parking charges on motorists who overstay the permitted time falls within the scope of the regulations’.

However, he found that HHJ Moloney was right to hold that there was no want of good faith in the present case, concluding that ‘[t]he conditions on which motorists were allowed to use the car park were prominently displayed and contained no concealed pitfalls or traps’. Furthermore, incurring charges, no matter how brief the period of overstaying, was a familiar feature of on-street parking and municipal car parks, as was equipment monitoring cars entering and leaving the car park. Nor did the term ‘cause a significant imbalance between the parties’ rights and obligations’, albeit that an average charge of £20 per hour for overstaying ‘would be high’.

Nonetheless, Moore-Bick LJ concluded that ‘everyday experience of the use of charges of this kind by local councils to manage the use of a scarce resource tends to show that, provided the charge is not set excessively high, it does not create a significant imbalance in the parties’ rights and obligations’.

The argument that the charge was a penalty was given far greater attention and, I suggest, the judgments which have been handed down on this point are of interest to a much wider constituency than motorists.

Moore-Bick LJ began this part of his judgment by noting that ‘[t]he refusal of the courts of equity to enforce what they considered to be unconscionable bargains is of long standing’. He went on to consider early cases including Clydebank Engineering & Shipbuilding Co Ltd v Don Jose Ramos Yzquierdo y Castaneda [1905] AC 6. He noted that in that case the House of Lords was clear ‘that the critical question… was whether the sum in question was extravagant (or exorbitant) and unconscionable by comparison with the damages that could reasonably have been expected to be suffered by the injured party and not intended simply to deter from breach’.

However, more recently it has been recognised that this simple dichotomy is inadequate ‘because it fails to take into account that some clauses which require payment on breach of a sum which cannot be justified as liquidated damages… should nonetheless be enforceable because… they are justifiable in other terms’.

He referred to other cases where instead of looking at the payment in question in terms of liquidated damages, courts found that there were good commercial reasons for justifying the payment demanded. In Lordsvale Finance v Bank of Zambia [1996] QB 752, deteriorating credit risk was held to justify an increase in interest on a loan from the time of a default in payment, and provided ‘a good commercial reason for deducing that deterrence of breach is not the dominant contractual purpose of the term’.

In short, the test as to whether a payment is a penalty can, where the context allows, be much wider than simply asking whether it is liquidated damages or even whether it can be justified commercially by reference to a contractual purpose. It is whether the charge is justified by a combination of factors, social as well as commercial.

Thus in the context of the actual dispute before the court the charge which ParkingEye imposed could be justified by ‘the practicalities of providing a facility’ of the kind. The ‘obvious benefits to both consumers and retail businesses in having free or cheap car parking available close to the shops for limited periods’ would be undermined by motorists overstaying.

That the judge concluded that the relationship between a motorist and a company such as ParkingEye might not even be contractual, indicates the width of the test to be applied when it is alleged that a charge is a penalty. But as he made clear, that test is still firmly founded on the historic rule ‘grounded in public policy’ – namely, that despite the importance of enforcing agreements freely entered into, the court will not enforce an agreement which is extravagant and unconscionable.

Beavis has thus given the Court of Appeal an opportunity to delineate more than the lines in a car park – and may yet give the same opportunity to the Supreme Court. The principles distilled from his case have a far wider application.