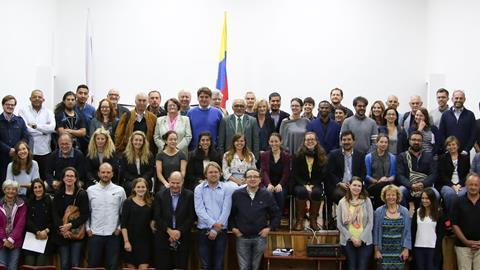 The work of the caravana is more important than ever to help lawyers withstand the global onslaught on civil liberties.

The prospect of peace in Colombia after 60 years of a civil war which has seen hundreds of thousands killed ought to be good news, but it turns out to be complicated.

The Caravana, a group of lawyers from around the world monitoring human rights abuses faced by legal professionals in Colombia, providing protection through witness, has been returning to the country every two years since 2008. When we arrived in Bogota in August, there was a heady atmosphere of excitement as the peace deal was signed in Havana and we met lawyers campaigning for a ‘yes’ vote in the then forthcoming peace referendum wearing ‘VOTA SI’ badges.

But then we met the mothers and sisters and sons of young men murdered by the army, worrying that peace might deny them the justice they had been fighting for in the wake of the ‘false positives’ scandal under which innocent men were killed by the army and passed off as enemy combatants in exchange for a fee.

As always we were hoping this year’s delegation would be able to report on an improved situation for human rights lawyers. Instead we heard the prospect of peace seems to have increased the risks. According to the UN Office of the High Commissioner of Human Rights, more human rights defenders were murdered in 2015 than in any of the last 20 years. In fact, in the first six months of this year, a human rights defender was murdered every five days, according to the NGO ‘Somos Defensores’. When I asked Colombian president Juan Manuel Santos about this during his recent state visit to the UK, he said the culture in the police and army had changed and the peace would solve all this.

Shortly after we left Colombia, William García Cartagena, a lawyer who was based in Medellin, was murdered, apparently just because of who his client was. The Colombians we met fear that, as more multinationals accept president Santos’ invitation to move into the country post-conflict, those defending human rights and the environment will remain on the firing line.

The Caravana was truly international and diverse: it included a prosecutor from Argentina, criminal defence lawyers from Greece, judges from Canada and Belgium, and a high street solicitor from Abergavenny (Glyn Maddocks, a member of the Law Society’s Human Rights Committee). And we were keen to share the Irish delegates’ positive experience of peace.

As always, there are parallels with the experience of lawyers in UK, but on a very different scale. We met a prosecutor, Maria Nancy Ardila Pedraza, who had experienced constant threats since she ordered the arrest and investigation of 29 paramilitaries. Although she had some state protection, both her brothers had since been murdered and she was living in a state of extreme fear for herself and her surviving family members. Then there is the continuing stigmatisation of human rights and human rights lawyers.

Earlier this year, retired military general Iván Ramírez appeared on Colombian television and said that the army had won the war against the revolutionary armed forces of Colombia (FARC), but lost it against José Alvear Restrepo Lawyer’s Collective (CAJAR), a well-known collective of human rights lawyers, making reference to the cases where CAJAR have ensured the prosecution and conviction of senior military involved in extra-judicial killings.

We met Yessika Hoyos, one of CAJAR’s lawyers and the daughter of a prominent trade unionist who was murdered. She had tracked down those responsible and they face trial. But when she came to speak to the European Parliament about the case, she was accused by Spanish MEPs of being a terrorist member of the FARC and denied the right to speak.

Other prominent human rights lawyers under threat include Judith Maldonando, who told us she has been placed on a paramilitary death list. Then there is Rommel Durán Castellanos of the EJP (People’s Legal Team) in Bucaramanga who has a price on his head due to his work on emblematic cases including on the environment and land restitution. His brother was shot dead in the family car with his wife and children beside him, minutes from where Rommel lives. Despite the Caravana’s letters to the Victims Protection Unit, Rommel is still waiting for a decision on whether or not he qualifies for government protection measures.

It is the spirit of these Colombian human rights lawyers that motivates the Caravana to keep returning every two years to support their struggle. They have told us that without the protection provided by the Caravana highlighting their work internationally they simply would not exist.

In the words of Luís Guillermo Pérez, the legal director of CAJAR: ‘You know that each day may be your last, but working within those conditions gives you a new way of living. You don’t waste time because everything you do is important. We don’t die depressed, we die fighting.’ His message seems more pertinent than ever in the face of the current global onslaught on fundamental human rights and civil liberties.

For more info about the Colombia Caravana UK lawyers group, see the website.