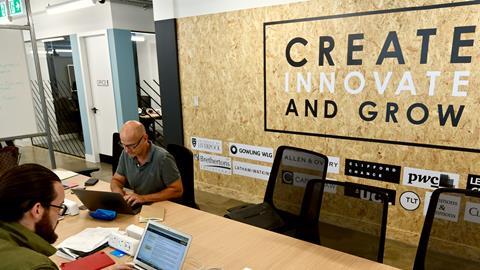 Lawtech is approaching a crossroads in terms of technology development, investment and adoption. The start-up dynamic is maturing as a new generation of legal businesses emerges.

This summer saw EY’s acquisition of Riverview Law and Kira Systems’ $50m funding from Insight Venture Partners. There were also big wins for law firm innovation functions (variously self-described as ‘labs’ or ‘incubators’)  which have helped to boost firms’ reputations as innovators.

A notable example is Facebook’s July acquisition of Bloomsbury  AI, a former resident of Allen & Overy’s Fuse. Apparently, Fuse is not strictly an incubator – in an interview by Bob Ambrogi for his NextLaw podcast (tinyurl.com/ycnsjku7), head of Fuse Shruti Ajitsaria describes it as ‘a   technology innovation space that gives legal technology companies the opportunity to work directly with Allen & Overy’s lawyers and clients’. This would explain why current residents include Kira Systems (founded in 2011) and Neota Logic (2010), as well as, until recently, cutting-edge offerings like Bloomsbury AI (2015), which uses natural language processing to help machines use the information found in documents to answer questions.

Another successful proof of concept for law firm involvement in developing transformative technology is Slaughter and May’s stake in Luminance, which sells its AI-powered document review platform to law firms and corporate legal departments.

However, as the new lawtech market matures and more law firms launch incubators, labs and breakaway businesses focused on legal innovation, start-ups are contemplating whether affiliation with a law firm might constrain the potential for wholesale adoption of their product or service across the legal services sector.

Merlie Calvert, former in-house lawyer and ‘intrapreneur’ turned lawtech entrepreneur, based her start-up Farillio in London’s Techhub. She says the location is preferable to a dedicated lawtech space as it keeps her close to Farillio’s vision and market: a collaborative space for tech entrepreneurs who share skills and ideas and who are potential clients for Farillio’s platform that offer affordable curated legal resources for entrepreneurs and start-ups on a subscription or pay-as-you-go basis.

Calvert explains that Farillio is not just about selling templates for common scenarios that small businesses face. It is also about making sure that businesses and entrepreneurs use the right template for each specific set of circumstances, so resources include online access to lawyers. Calvert wanted to avoid the potential limitations of a specialist lawtech hub because Farillio’s clients are businesses and individuals in any industry or profession.

However, other business-to-business lawtech start-ups are looking to benefit from law firm use cases (the way a technology is applied) while retaining their ability to operate independently from a particular firm or educational establishment.

Barclays Eagle Lab in Notting Hill Gate fills the market for a lawtech incubator that enables start-ups to explore law firm use cases without affiliation to a single firm. It is supported by 13 law firms, including Allen & Overy, as well as The Law Society, Legal Geek, the University of Liverpool and University College London. Like all Barclays Eagle Labs, it occupies former banking premises that were no longer required when banking operations shifted online.

Peter Richards of ayfie, a lawtech company based at Eagle Labs, said at its ‘AI Frenzy’ event in August that he believed legal IT was reaching ‘a tipping point’ for technology adoption. Text analytics company ayfie was founded in 2009 and raised $8m in funding in 2017, so what was it doing in an incubator? Richards explained that ayfie was based in Eagle Labs because this would further its plan to ‘become ubiquitous’ in legal by gaining insights from Eagle Labs’ legal industry partners while remaining independent. Another new resident at Eagle Labs, Legatics, recently moved from Fuse, while Ginie AI and Legal Utopia are new ventures.

It seems that legal technology is also reaching a tipping point in terms of technology development and investment as the lawtech start-up dynamic matures.

As technology innovation has become an essential part of law firm branding, lawtech start-ups are attracting serious  investment. This is good news as it validates the strategic importance of technology – and technology innovation – to legal services delivery at every level, but it is changing the competitive environment for law firms, suppliers, incubators and start-ups, who are all dealing with very different competition from just a few months ago.

Major investors from financial services, tech giants and Silicon Valley venture funds are competing with the big legal technology companies to invest in and become involved with start-ups that promise a good – and fast – return on investment, through acquisitions that will grow in size and market share, and/or through developing technology that will genuinely transform legal services delivery.

The lawtech start-up market is maturing to cater for different categories of entrepreneur. One is the visionary, with a long-term mission to become one of the big players that either unseats incumbents or develops partnerships that create a space within the incumbent market. For example, Kira Systems’ expansion and popularity has been achieved by sticking to its original vision, while extending its ability to interface seamlessly with other legal technology platforms.

‘NewLaw’ ventures, which combine legal and lawtech offerings, are also hitting the big time. Initially, these tended to be niche players, but this is changing. LegalZoom raised $500m in July and on 10 September Atrium, co-founded in 2017 by serial entrepreneur Justin Kan (a previous venture, live-streaming site Twitch, was acquired by Amazon for $1bn in 2014), raised $65m in a funding round led by Silicon Valley’s Andreessen Horowitz, with Marc Andreessen and Andrew Chen joining the board. Co-investors include General Catalyst, YC Continuity Fund and Sound Ventures. Atrium, which uses machine-learning to analyse legal documents, also acquired Tetra, which uses AI to take notes on phone calls, and its team of developers.

Serial entrepreneurs like Kan are an important catalyst for the lawtech take-up tipping point. Along with investors, start-up exit strategies are also changing the landscape. This is exemplified by iManage RAVN, which brought AI-powered search, extraction and insights to the popular iManage document management system following its acquisition of UK AI start-up RAVN in 2017. This made AI accessible to mainstream law firms, without requiring them to understand or research the technology and how it could be applied to their business. They could introduce AI – in some cases at the request of client companies which had read about its speed and scalability – simply by trialling an add-on to a familiar core platform.

This and other mainstream vendor acquisitions of cutting-edge applications are pushing the adoption agenda, enabling law firms and legal departments to introduce advanced technology in a way that fits their organisational culture and their procurement Practices. These are also starting to change as law firms are beginning to look outside the sector for technology to support and differentiate their practices.

The involvement of Silicon Valley entrepreneurs and investors, and Big Four consultancies is driving the lawtech start-up dynamic in new directions, encouraging start-up law firms and tech businesses to follow the example of Kira Systems (and others) and think big.

Thus far, technology take-up seems to have been constrained by two key factors: law firms’ extended procurement process, which means it takes a long time for any new product/service to gain traction; and the increasingly crowded market for similar offerings in contract automation/analytics (for example) which creates challenges around product selection and market differentiation.

The legal AI frenzy (accurately coined by Eagle Labs) that has dominated legal and mainstream media for some time is at last changing firms’ attitudes towards emerging technology. They are recognising that innovation, in the sense of doing things differently, is helping them win and retain business. As lawtech start-ups are attracting significant investment to help them grow into major players, firms are learning to emulate the start-up culture and experiment with new technology.

Another step towards technology adoption is that firms that may not accept the business risk of partnering with early-stage start-ups (as opposed to investing in them) are looking at other industries for software and services that could be applied to their business, broadening their technology perspective and their opportunities for innovation and differentiation.

Cloud on the horizon

At the NetDocuments ndElevate EMEA user conference, CEO Alvin Tedjamulia drew an analogy between the transformational impact of fire on human development and the impact of cloud computing on future technology. ‘We cannot predict where the future will take us, but we do know that it will be through the cloud,’ he told the conference at the Law Society. NetDocuments is a cloud-based content management platform that includes document and email management systems.

However, Tedjamulia’s speech highlighted the dissonance between the AI media frenzy and the situation on the ground when it comes to mid-market law firms, many of whom are still using on-premise systems. Software-defined law firms, and the co-creation of content – and AI-powered lawtech all require the connectivity, scalability and security of cloud platforms.

An inspiring keynote was preceded by a panel discussion highlighting the advantages of transitioning core IT functions – document and email management – to the cloud in terms of UX (user experience), system reliability, data security and user protection.