In the latest initiative to modernise the courts system, the government has unveiled a 'quick and easy' service that will handle claims worth up to £10,000.

The Ministry of Justice says the new service, which goes live today, will obviate the need to fill in and post a paper form, or use an 'outdated' online system that dates from 2002, It will enable people to start an action in the county court for claims of up to £10,000, settle disputes online and recommend mediation services. The 2002 system will be phased out, the Gazette has been told. 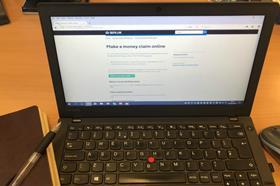 More than 1,400 people have tested the new system, which was piloted last year. The ministry says eight in 10 people, including small businesses, found the service 'very good and easy to use'.

Justice minister Lucy Frazer said: 'We know that using the civil courts has been a daunting prospect for some. This innovative, quick and easy online system will enable people and small businesses to get back the money that is rightly owed to them. This is an excellent example of the work we are doing under our £1bn plan to transform the courts system, allowing people to access justice online and around their busy lives.'

Mr Justice Colin Birss, chair of the Civil Procedure Rule sub-committee which dealt with the civil money claims pilot, said perceived delays and system complexities have 'for too long', deterred people from using civil courts to make small claims. 'When it is complete, this new online route will give members of the public and small businesses a more user-friendly way to access justice. The system now being made available to the public is the first stage in that new route,' he said.

Laura Iron, head of service at the Personal Support Unit, a charity which supports people who represent themselves in the civil and family justice system, welcomed the initative. She said it 'avoids most of the formal legal language of traditional court processes, and is much more intuitive for users'.

The Bar Council described the online civil money claims pilot as a 'modest first step' to using technology to identify key issues at the first stage of claims and to encourage litigants to resolve lower-value claims amicably. However, 'the pilot must be evaluated carefully, and it must not be assumed that lessons learned are necessarily applicable more widely or to more substantial or complex claims', it added.

The ministry says the system 'begins to deliver the vision' set out by Lord Briggs in a 2016 report for an online court for claims worth up to £25,000.

People can already appeal tax decisions and apply for a divorce online.