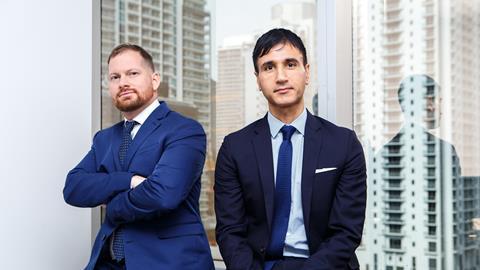 Global law firm Clyde & Co has announced the hiring of a leading ten lawyer insurance team in Miami, who began on January 1 2018.

Sina Bahadoran and Eric Hiller join Clyde & Co from Hinshaw & Culbertson LLP as partners are joined by their team of 10 lawyers and other legal support staff. They will bolster the firm’s insurance practice in Miami, where Clyde & Co first opened in May 2016 following a merger with Thornton Davis Fein.

Sina has been at Hinshaw & Culbertson since 2003 and was a member of its Executive Committee.

Barry Davis, managing partner of Clyde & Co’s Miami office, says: ’Sina, Eric and the team are well recognised in the industry for their insurance coverage skills. Sina is a proven team player who has built a very successful practice and will significantly strengthen our insurance coverage and litigation capabilities in Miami. The team’s reputation, combined with Clyde & Co’s national insurance practice and unrivalled global reach, provide significant potential for growth.’

Sina Bahadoran, says: ’We are very excited to be joining Clyde & Co, a firm which has brought renewed energy and focus to the insurance space. The opportunity we have to significantly grow and enhance our insurance practice is second to none and we look forward to playing our part in realising the firm’s ambitious growth plans in the United States.’

This expansion in Miami is the latest growth for Clyde & Co in the US, where it first launched in 2006 and follows the hiring in December 2017 of a 15 partner/ 80 person insurance and litigation team from Sedgwick LLP, which includes Alfred C. Warrington V in Miami.