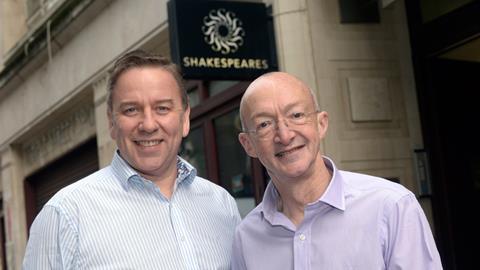 He replaces Paul Wilson (pictured, top left), who has stepped down from his role after nearly nine years in charge of one of the UK’s fastest-growing law firms.

Paul joined Shakespeares in 2006 when turnover was £10m with a team of less than 200. In less than a decade Shakespeares has merged with seven regional competitors, grown from 200 to 670 people and from £10m of revenue in Birmingham to £50m based across the broader Midlands.

Mark English, joint senior partner at Shakespeares said: ‘Paul has been an integral part of the development and execution of our strategy over the past nine years.

‘We are delighted that our long-term succession plans have come to fruition. Andy Raynor has worked with Paul and our main board team since 2013 and has already made a tremendous impact. He shares our passion for growth and creativity as we continue to build a sizeable national firm built on a strong regional presence. We believe Andy is the ideal appointment for the next phase of our development.’

Andy Raynor, who was previously chief client officer, said: ‘It’s thrilling to be asked to lead a team of such original thinkers. Shakespeares has a deserved reputation for doing the unexpected. We’re not in business to be the same as the rest!

‘Shakespeares is all about originality and opportunity and most of all, I’m looking forward to working with people and clients that are ambitious for growth – and helping them achieve their goals.’