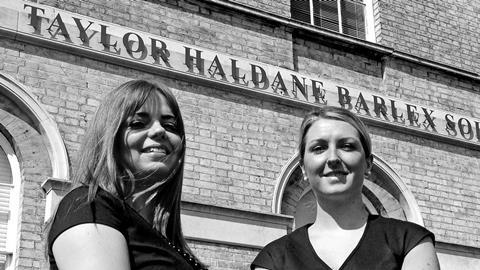 Ita joined THB in 2007 when she chose to cross-qualify as a solicitor having originally studied the Bar Vocational Course. She qualified with the firm in 2008 and continues to excel in all that she does.

Ita (pictured, right) has been instrumental in the growth and development of the practice, particularly with regard to the firm’s unrivalled youth crime and prison law departments and establishing a highly regarded pro bono legal advice clinic at HMP YOI Warren Hill.

Ita became a higher court advocate in 2010 and in 2013 became an associate with the firm. Her promotion to partner is well deserved and in recognition of her continuing hard work and dedication to the firm.

Briony joined THB in 2001, only a few days after it was founded. The practice and Briony developed alongside one another with Briony gaining police station accreditation aged only 19, qualifying as a solicitor with the firm in 2009 before becoming a higher court advocate in 2012 and an associate in the practice in 2013.

Briony (pictured, left) has extensive experience in the field of general crime but has also assisted in the firm’s continued development as one of the leading regulatory law practices in the South, working alongside Matthew Taylor in relation to complex Health and Safety Executive prosecutions.

Her appointment as partner is in recognition of her commitment to the firm, devotion to its clients and unlimited energy.

Russell Haldane, founder partner, said: ‘We are delighted to welcome Ita and Briony to the partnership table, they have both given so much in terms of the firm’s growth over the years and have demonstrated that they have so much more to offer as partners… there’s no stopping them!’