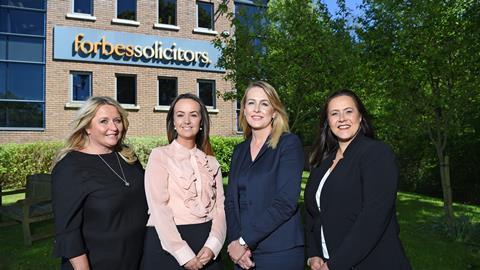 The largest legal practice in the north west outside the major cities has promoted Shirley Wignall and Gill Carr to partner and confirmed that Jenny Burke and Amy Stirton have been promoted from solicitors to associates.

Forbes Solicitors said that it championed equality and diversity and, although promotions were decided purely on merit the number of women in senior posts was increasing.

Siobhan Hardy, senior partner at Forbes said: 'These well-deserved appointments underline the strength in depth which we have at Forbes and our track record for nurturing talent and helping people to build careers with us.

'The fact that all four promotions involve women underlines our commitment to equality and diversity and bring the total of women Partners in the firm to over 40%.'

Shirley Wignall, based in Blackburn, is a solicitor in the family law department with over 20 years of experience having qualified as a solicitor in 1996, her particular area of expertise being children law. She has been a member of the Law Society Children Panel since 2002, and represents children and adults in court proceedings, including cases involving social services.

Gill Carr, also based Blackburn, has worked in family law since 1996 and holds Law Society accreditation for the Family Law and Children Panel. She is a committee member of Resolution, the national organisation of family lawyers, and is Regional Press Officer for Lancashire & Cumbria region. Gill specialises in matters relating to families who are involved with children’s services which includes representing parents, children and family members in meetings and also in proceedings issued before the court.

Jenny Burke, based in Forbes central Lancashire office, works in the corporate team and assists business clients of all sizes from a range of sectors with work varying from assisting with new business start-ups to working on mergers and acquisitions, corporate restructures and re-organisations and drafting partnership and shareholders agreements.

She acts for a wide range of clients including owner managed businesses, banks and financial institutions, shareholders, investors and management teams.

Amy Stirton is part of the Housing and Regeneration team and is based in Chorley. She represents Local Authorities and social landlords in relation to all aspects of housing management work but deals predominantly with cases involving antisocial behaviour, breach of tenancy and hoarding.