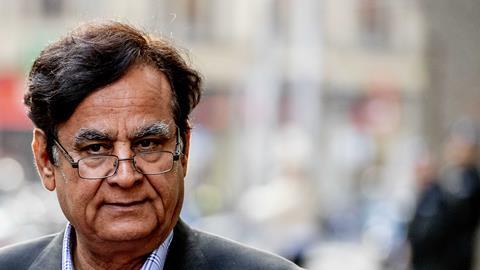 The lawyer for a Christian woman who faced a death sentence for eight years after being convicted of blasphemy says he has no regrets about defending her - despite facing death threats himself.

Bibi's lawyer, Saif ul-Malook told an International Conference on Sharia, Segregation and Secularism in London on Sunday that, in his 38 years of practice, he had never heard of a situation 'where a group of people come with such a demand that they will kill the highest constitutional court judges if the verdict does not come to their wishes'. ul-Malook stressed that it was a 'small group of people in Pakistan, not Pakistan'.

Explaining the case, ul-Malook told the conference that Bibi was working in a field for £1 a week: 'You can imagine what was her status. She had never gone to school... She cannot write her name.'  Bibi offered water to two Muslim girls who refused, which led to 'hard words exchanged between them'. The imam of the village mosque called the district imams. After five days, Bibi was arrested. 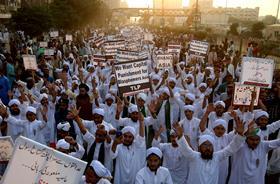 ul-Malook said Bibi lost her fight in the first court and unsuccessfully appealed her death sentence: 'Then I thought I must come forward for this helpless lady.'

The conference heard that ul-Malook worked on Bibi's case for four years. Her appeal was heard in the Supreme Court on 8 October and judgment was reserved. The court's 56-page judgment, overturning Bibi's sentence, was published on 31 October.

ul-Malook told the conference that he had been brought up in a village which had a church. He recalled: 'As a small young boy, I used to go to church to all the functions, they would come to our functions. I have many Christian friends in Pakistan... Everywhere in the world there should be some people who must stand when then the nation needs, must stand when no one is standing. I'm proud of defending...Asia Bibi. I have no regret.'

The conference urged the UK government to grant Bibi protection and asylum. Its resolution supporting Bibi states: 'Whilst Asia Bibi has been released on appeal in November 2018 after eight years on death row, her life is in danger and she is living in hiding. Islamist groups have been calling for her death as well as the death of her lawyer Saif ul-Malook and the judges who acquitted her... Despite her urgent need for refuge, the UK Foreign Office has urged the Home Office not to grant Asia Bibi political asylum in the UK out of safety concerns. This decision amounts to a gross violation of the very idea of asylum as a human right.'