Costs bill not valid because solicitor’s signature was illegible

A bill of costs was not validly served in part because the solicitor’s signature on the certificate was illegible, the High Court has ruled.

Lawyers for the defendant in the settled clinical negligence claim had said the costs bill, prepared by national firm Irwin Mitchell, was not properly certified because the signatory was not identifiable. It was also submitted that the paper bill failed properly to give the name and status of each fee earner and failed to identify the work each had done.

Steyn J said it was ‘unsatisfactory’ if the certification gave rise to any doubt about who signed, and it was not even clear in this case that the document had been certified by a solicitor. ‘This interpretation does not impose an onerous requirement,’ she said. ‘On the contrary, specifying the name of the signatory is a simple and wholly undemanding step, with which certificates on bills of costs ordinarily comply.’ 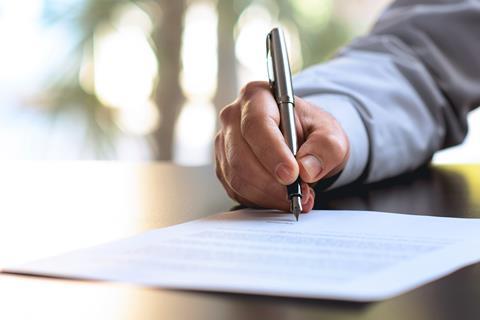 The judge rejected the submission that the remedy sought – to strike out the bill of costs – was draconian. The court had heard that the defendant solicitors Keoghs had disputed the bill saying the signature on the certificate was illegible and requested confirmation of who signed it.

In response, Irwin Mitchell insisted the bill had been signed and the rules complied with, arguing there was no requirement for a printed name and questioning why there was any dispute over the issue.

Steyn J added: ‘Given how little effort or cost it would have taken to have provided the name of the signatory for which the appellant asked in November 2019, I confess to some astonishment that the respondent chose instead to withhold the information and argue the point.’

The defendant also alleged that the paper bill was defective because it failed to give the name and status for each fee earner and failed to outline the work they had done. Irwin Mitchell argued the term ‘status’ in the civil procedure rules was not defined, and that the fact there was a column for names and grades did not require those detailed had to be provided. It was stated that in other cases it has proved possible to settle costs without this level of information.

Steyn J said it was important that the bill should provide information about the experience and expertise of each fee earner, and in particular, the number of years of post qualification experience.