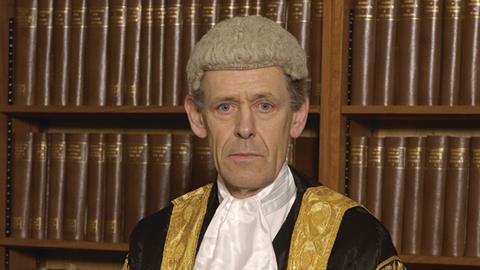 Lord Toulson, a former Supreme Court justice and chairman of the Law Commission, has died at the age of 70, it was announced today.

Toulson was appointed as a justice in April 2013. He retired in September 2016 but continued to serve on the court's supplementary panel.

In a statement today, Supreme Court president Lord Neuberger said: 'Justices and staff alike are shocked by the news, and we offer our deepest sympathy to Lady Toulson, his children and their families. They are all very much in our thoughts at this tragic time.'

Toulson was called to the Inner Temple bar in 1969 and became a bencher in 1995. He became Queen's Counsel in 1986 and served as a Crown Court recorder from 1987 to 1996. In 1996 he was appointed to the High Court. He sat in the commercial and administrative courts, and was then presiding judge on the western circuit from 1997 to 2002.

Between 2002 and 2006, Toulson was chairman of the Law Commission of England and Wales. He was appointed to the Court of Appeal in 2007. He also served on the Judicial Appointments Commission.

Neuberger added: 'Through his judgments and during hearings, Lord Toulson demonstrated a learned, deeply thoughtful and principled approach to resolving legal problems. These qualities ensure that his enormous contribution to the common law will always be remembered as disproportionate to the relatively short time for which he served upon the Supreme Court.

'And, of course, he made great contributions to the law and to the administration of justice as a judge in the High Court and Court of Appeal, as well as a practising barrister before that.

'He will never know the full extent of the impact that his considerate, thoughtful and encouraging nature had on the court, the wider profession and the society we serve, but it is a legacy that we will all treasure long into the future.

'He was a truly valued colleague, a man of honour, modesty and integrity who will be deeply missed by all with whom he worked.'