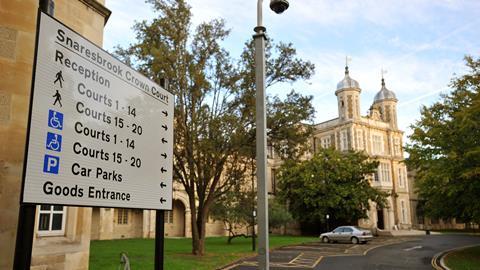 The courts service today revealed which sites will benefit from the £15m cash sweetener offered by the Chancellor of the Exchequer in October’s budget.

The money was set aside by Philip Hammond for security and maintenance work and will be spent on more than 170 upgrades before the end of the financial year.

The extra spending, which comes despite cuts to the overall Ministry of Justice budget, follows repeated complaints by judges and lawyers about the crumbling nature of so much of the court estate. Last week, Lord Chief Justice Lord Burnett said the environment in some criminal courts was ‘sub-optimal’.

Around £4m will be spent replacing the roofs at Snaresbrook Crown Court and Winchester Crown Court. The Snarebrook work is the first phase of a longer-term refurbishment.

HMCTS will spend £3m on security-related work including new locks and panic alarms, vision panels in doors and CCTV in waiting areas.

Just over half the money will be spent on facilities management, in particular upgrading heating and cooling systems in court buildings.

The court service has already carried out improvement works at Liverpool Family and Civil Court and at Swindon Combined Court. Work is also underway to develop a new purpose-built combined court by 2025 in central London.

Lucy Frazer MP, justice minister, said: ‘We want to provide the best experience possible for the victims, witnesses, staff and legal professionals who use our courts every day. That is why this extra funding is so welcome – and why we’ve worked with the judiciary to make sure we spend it where it is needed most.’

The government is spending £1bn on a court reform programme that introduces new technology and modern ways of working to the justice system. This is due to be completed by 2022, although a new online civil money claims service and new online system for applying for divorce are already up and running.