The government has given its wholehearted approval to a massive increase in fining powers by the Solicitors Regulation Authority. Lord chancellor Dominic Raab said the limit rising from £2,000 to £25,000 will speed up the disciplinary process and allow the Solicitors Disciplinary Tribunal to focus on only the most serious cases.

The SRA proposed changes to its fining powers in November and last month announced that plans would be taken forward. The Ministry of Justice was required under the Solicitors Act 1974 to approve the increased threshold – likely to come into force at the end of July – but the enthusiastic nature of its announcement, complete with endorsement from Raab, is unusual.

He made a point of saying the SDT will be able to concentrate on fewer, more serious, allegations including firms working for sanctioned Russian oligarchs and businesses. 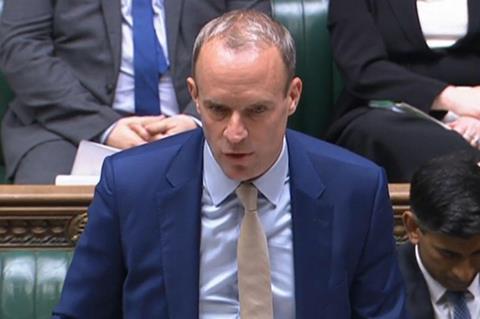 Raab said: ‘The UK can be proud of our world-leading legal services. But it is essential the sector retains its international reputation for the highest standards of probity. That’s why we are allowing swifter and firmer action to be taken against those who break the codes of conduct. And we’re freeing up the Solicitors Disciplinary Tribunal to focus on the most serious breaches, such as those involving Russian sanctions.’

The SRA is likely to administer around 90% of all fines in future, based on financial penalties levied by the SDT over the past eight years.

The regulator investigates almost 2,000 cases annually and imposed over 250 fines in the last year. It will continue to refer firms and solicitors to the tribunal in the most serious cases.

Anna Bradley, chair of the SRA, said: ‘The overwhelming majority of solicitors meet the standards we all expect, but when they don’t, we step in to protect the public and maintain confidence in the profession.

‘There was strong public support for increasing our fining powers when we consulted last year and this change will mean we can resolve issues more quickly, saving time and cost for everyone. It will reduce stress and allow more focus on the most complex and challenging or serious cases.’

Law Society of England and Wales vice president Lubna Shuja said the MoJ had agreed a disproportionate 1,150% and ignored the majority views of opposition expressed in response to the SRA’s consultation on the matter.

She said: 'We remain concerned about the lack of independence within the SRA between decision makers and prosecutors, as well as the lack of transparency around SRA decisions. We do not think that the right of appeal to the SDT is an adequate safeguard.

'We staunchly opposed this increase in fining powers and lobbied the MoJ to reconsider its position, however, it has decided to forge ahead. The SDT remains the most appropriate jurisdiction for more serious and complex matters and those that may involve higher fines. It guarantees independence, transparency, objectivity, has adequate safeguards and much greater powers – including the ability to impose fines and strike-off a solicitor. We will monitor the impact of the increased fining powers to ensure regulation is proportionate and effective.'