The person at the centre of the Westminster spy accusations is a solicitor on the roll in England and Wales, it has emerged. Christine Lee has been named in an ‘interference alert’ from MI5 as an alleged Chinese agent said to ‘be involved in political interference activities in the UK'.

The Solicitors Regulation Authority confirmed that Christine Ching Kui Lee was admitted as a solicitor in England and Wales in February 2002, rather than being a registered foreign lawyer.

In a letter to MPs Sir Lindsay Hoyle, the speaker of the House of Commons, claimed that Lee had been ’engaged in political interference activities on behalf of the Chinese Communist Party, engaging with members here at parliament and associated political entities, including the former APPG [all-party parliamentary group] Chinese in Britain’.

Hoyle wrote that Lee had facilitated donations to serving and aspiring parliamentarians on behalf of foreign nationals in Hong Kong and China. He wrote: ’This facilitation was done covertly to mask the origin of the payments. This is clearly unacceptable behaviour and steps are being taken to ensure it ceases.’

Lee is the director of Christine Lee & Co Solicitors, which has its head office in Birmingham and an office in Soho, in London. Three other solicitors work at the firm, which offers advice on matters including commercial and residential property, company and commercial law, family and immigration law, and services in Cantonese, Mandarin and English. 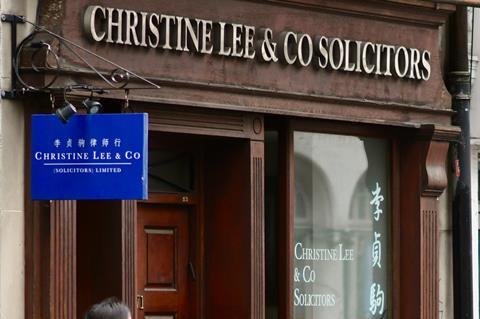 According to the firm’s website, the business ’has been established and serving the British community for over 30 years and provide [sic] high quality, personalised legal services’.

It says: ’Much of the success of the firm has been spearheaded by Madame Christine Lee herself, propelling the firm forward into a pre-eminent firm within the UK Chinese community and is now a reputable name in both the UK and China.’

The website adds: ’Christine Lee & Co are proud to be British and of Chinese ethnic background and origin. We have the advantage of being a truly British Chinese firm, understanding the cultural and language differences between the UK and China where we are able to bridge the gap between the Chinese and British culture.

’Overcoming such cultural obstacles we are able to provide truly high quality and effective advice for both corporate and individual clients to achieve their objectives.’

An SRA spokesperson said: ’We are aware of the issue and are gathering relevant information.’ He said that Lee has no regulatory decisions against her.

China has denied interfering in UK politics and the Chinese Embassy in London accused MI5 of ’smearing and intimidation’. In a statement on its website, an embassy spokesperson said: ’China always adheres to the principle of non-interference in other country’s internal affairs. We have no need and never seek to ”buy influence” in any foreign parliament. We firmly oppose the trick of smearing and intimidation against the Chinese community in the UK.”

Gregory Treverton Jones QC, a regulatory and disciplinary barrister at 39 Essex Chambers, told the Gazette that if Lee was found to have broken the law, the SRA would almost certainly prosecute her for damaging the trust that the public places in regulated lawyers.

But, he said, the regulator does not have the resources to investigate an allegation of spying for a foreign state and would be dependent on information supplied by the UK government.

Treverton Jones added that the SRA has power to intervene in Lee’s practise if it suspects dishonesty or for other reasons set out in the Solicitors Act 1974, which would ordinarily involve suspension of a solicitor’s practising certificate.  ’The SRA also has statutory powers to revoke, suspend, or impose conditions upon a solicitor’s practising certificate in certain defined circumstances,’ he said.