The Supreme Court today blocked a £3bn data protection claim against Google, ruling that the case against the tech giant is ‘doomed to fail’.

The UK’s highest court unanimously allowed Google’s appeal and held that damages for alleged breaches of section 13 of the Data Protection Act 1998 can be claimed only where the breach has caused ‘material damage or distress to the individual concerned’.

In Lloyd v Google, the Supreme Court was asked to overturn the Court of Appeal’s ruling that a consumer activist representing more than four million Apple iPhone users in England and Wales can serve proceedings on Google outside of the jurisdiction.

Richard Lloyd – a former director of Which?, who is backed by litigation funder Therium Litigation Funding – began proceedings in 2017 on behalf of all individuals who were affected by the so-called ‘Safari workaround’ between August 2011 and February 2012.

Google was alleged to have ‘illegally misused the data of millions of iPhone users’, through the ‘clandestine tracking and collation’ of information about internet usage on iPhones’ Safari browser, Lloyd’s legal team argued.

The High Court refused permission to serve proceedings out of the jurisdiction in 2018, but that decision was reversed by the Court of Appeal the following year – a ruling Google’s lawyers told the Supreme Court would ‘open the floodgates’ to mass data protection claims. 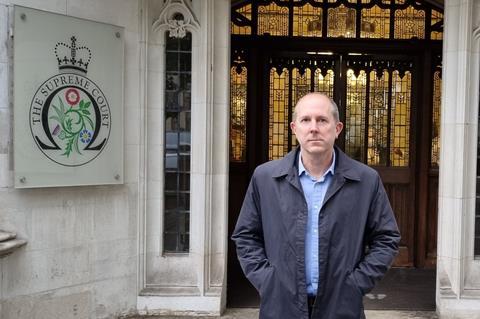 Lloyd: 'Bitterly disappointing for British consumers who are having their data rights abused'

In today’s ruling, the Supreme Court held that ‘an individual is only entitled to compensation under section 13 [of the DPA 1998] where “damage” – or in some circumstances “distress” – is suffered’.

Lord Leggatt said the wording of s13 ‘cannot reasonably be interpreted as giving an individual a right to compensation without proof of material damage or distress whenever a data controller commits a non-trivial breach’.

The judge said: ‘The claim has no real prospect of success … because, in the way the claim has been framed in order to try to bring it as a representative action, the claimant seeks damages under section 13 of the DPA 1998 for each individual member of the represented class without attempting to show that any wrongful use was made by Google of personal data relating to that individual or that the individual suffered any material damage or distress as a result of a breach of the requirement of the Act by Google.’

He added that ‘without proof of these matters, a claim for damages cannot succeed’.

Speaking to the Gazette outside the Supreme Court, Lloyd said the ruling has ‘set the bar extremely high’ for representative actions in data protection claims. ‘It’s clearly bitterly disappointing for British consumers who are having their data rights abused,’ he added. ‘It does look me effectively as if that is the end of this particular claim, but the court’s endorsement of the procedure that we have been trying to use, albeit with a very high bar, I’m sure will mean that other claims will still be able to come forward,’ Lloyd said.

His solicitor James Oldnall, managing partner at claimant firm Milberg, said the ruling could leave ‘particularly vulnerable cohorts’, such as children – on whose behalf a similar claim against TikTok is currently being brought – and ‘those people who aren’t necessarily familiar with the digital economy’ without a means of redress. ‘They are left without a remedy,’ he said.

He asked: ‘In relation to the GDPR itself, does that mean that it is a toothless remedy or toothless legislation if large quantities of consumers can have their data taken in breach of the legislation but cannot practically enforce their rights? Where are we left?’

Oldnall said the government had ‘the opportunity’ to introduce collective action procedures for data protection claims, but recently said that ‘we don’t need to in data because we’ve got Lloyd v Google’. He added: ‘Well, now we don’t so it’s really back to them to sort it out’.