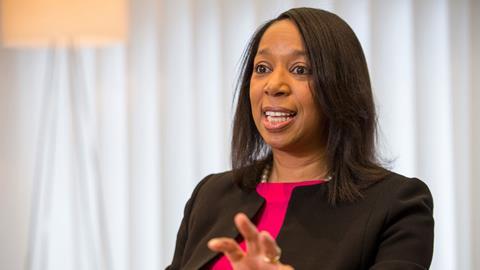 Linklaters’ capital markets counsel Paulette Mastin was undaunted when, more than 20 years ago, a friend advised her that being black and female meant she would never make the grade in a City law firm.

‘It made me even more determined,’ she says, ‘to press ahead and prove that all that’s needed in any situation is the opportunity to translate good intentions into good-quality work.’ This she has certainly achieved in what she describes as the ‘fast-paced and constantly evolving’ field of capital markets: ‘There’s no chance of getting bored. It’s certainly kept me interested for two decades.’

In that time she has risen from trainee to counsel at the magic circle firm. She advised in the first case where an English scheme of arrangement, approved by a British court, was instrumental in the bond debt restructuring of a Russian bank [renegotiating and reducing debt so as to restore liquidity]. Such schemes have subsequently become common as cross-border debt restructuring tools for businesses in Russia and the Commonwealth of Independent States.

In Dubai 10 years ago, Mastin was also involved in a property deal that hinged on the first internationally-rated sharia law-compliant securitisation. ‘The [Islamic] scholars were all over it,’ she recalls. ‘It was all new and exciting, and dependent on the sukuk, the sharia-compliant version of the eurobond. We expected it to be the forerunner of a new growth market, although the market has been slow to take off.’

What prompted Mastin to specialise in capital markets? ‘I was in the derivatives team at an investment bank,’ she explains, ‘when I was asked to assist with a case that piqued my interest in understanding and applying the law around transactions based upon capital markets. It all seemed more interesting than financial products. So I took the high-risk, high-stakes decision to quit my job – without another job to go to – and train to pursue a law career.’

After the College of Law, says Mastin, her immediate ambition was to work in a human rights or commercial practice: ‘But definitely not in criminal law. I knew I didn’t have the emotional detachment to interview victims and criminals.’ She had begun talking to some civil liberties firms when she met a friend who was still at the investment bank that she had left. The friend persuaded her to ‘leverage her banking experience’ and apply to commercial firms. She secured a training contract at Linklaters in 1995. ‘It turned out to be the perfect marriage between my passion for the law and my knowledge of financial products,’ she says.

Was it all plain sailing? ‘Not at all,’ Mastin insists. ‘I’d never been exposed to working in a law firm and, in essence, was retraining from scratch. I had to make adjustments and rethink my whole approach. Like all trainees, I was working under supervision, but there were few role models [who were black and female working in the City]. I felt I had to prove myself on a daily basis, particularly when things went wrong.’

She won through and qualified in capital markets in 1997, becoming part of the team advising corporate trustees, financial institutions, multinationals and others in a variety of capital market transactions. ‘Typically, I advise on structured financial products, infrastructure financing, private finance initiatives, the funding of renewable energy projects and stress transactions, such as corporate restructurings,’ she says.

What ignited her passion for the BSN? Mastin says that having had the opportunity to forge a career within a leading global firm, it was ‘incumbent’ on her to encourage and support other people from the black Asian and minority ethnic (BAME) community. To this end, sponsored by Linklaters and the Law Society, she helped found the BSN City Group in October 2008. ‘The financial crisis was leading to widespread redundancies in the City and we were acutely aware of the particular challenges facing BAME lawyers,’ she recalls. ‘The group focuses on the needs of black lawyers practising in and around the City.’

The group has subsequently held quarterly professional development and networking events, covering topics such as African emerging markets and the challenges facing lawyers during the credit crisis.

Given that society has largely embraced diversity – the newly elected mayor of London is a Muslim, for example – is there genuinely a need for such a group? ‘There are still issues around the under-representation of black lawyers at mid- to senior-levels,’ she says. ‘The group’s role is to seek to empower our constituents with the insights, knowledge and skills to progress their career and to help them circumvent or address difficult issues. We are levelling the playing field.’

KNOWN FOR chair of the City branch of the Black Solicitors Network; co-chair of Linklaters BAME network; winner of the Champion & Executive Award at the 2015 Business in the Community’s Race Equality Awards

She goes on to outline the group’s manifold activities. These include promoting relationships between lawyers in private practice and their in-house counterparts; hosting workshops to improve lawyers’ soft skills; and holding forums for mentoring and career support. The group now has more than 300 members.

Career workshops for BSN student members are delivered with the help of, among other organisations, the BBC and professional services giant Accenture. ‘We give tailored advice to young black people struggling to find training contracts and pupillages at a time when there are so few available,’ she says. ‘We have achieved success, most recently securing two vacation placements at City firms as the first step to securing longer-term positions.’

Another key initiative is the Diversity League Table (DLT), which the BSN first published in 2006. ‘It’s a vehicle for praising the achievements of some firms while also being something of a blunt instrument to “name and shame” firms that have not made diversity central to how they practise,’ Mastin says. The DLT comprises a series of league tables ranking the diversity performance of firms in the areas of ethnicity, gender, sexual orientation, disabilities and social mobility. It also presents an overall ranking taking into account all the diversity areas and includes articles and case histories. The DLT is supported by the Law Society, Solicitors Regulation Authority, Bar Council and others.

Mastin chooses the BSN’s Diversity Legal Awards as a third key initiative. These are the only industry awards that focus exclusively on recognising and promoting equality, diversity and inclusion across the legal profession. Some changes are afoot, says Mastin: ‘We are planning to introduce new awards categories, such as small firms, sole practitioners, and for the private and public in-house sectors.’

Have her efforts encouraged Linklaters to be a model of diversity? ‘The firm has never needed any such encouragement,’ she replies. ‘We are probably the industry’s most transparent law firm, happy to publish diversity and social mobility data on all students accepting a training contact with us. We are constantly casting the net wider to reach talented people of all backgrounds. Around a quarter of our trainees are the first people in their family to go to university, for instance. And we have recruited students from 37 different universities not just Oxbridge.’

Mastin co-chairs Linklaters’ BAME Network, which aims to influence how people from a BAME background are attracted, recruited, retained and promoted at the firm. She also co-chairs the firm’s Diversity Action Team, which was set up in 2012 to promote social mobility and has led to an increase in the number of Afro-Caribbean graduates recruited. ‘We are very active in the community,’ she says.

‘We provide around 100 work experience placements every year for young people, including those who are not in employment, education or training. We run a mentoring programme with 15- to 17-year-olds from Clapton Girls’ Academy. And about 30 volunteers from the firm, through one-to-one tutorials, help motivate students from disadvantaged backgrounds to improve their exam grades and get into top universities.

‘It’s all hugely satisfying. There are sound commercial reasons to be diverse, too. McKinsey published a report earlier this year called Why Diversity Matters. The research revealed that companies in the top quartile for ethnic and gender diversity are likely to have better than average financial returns than those companies in lower quartiles. It’s a compelling argument to build diverse talent.’

Mastin obviously has a busy workload. Why become the BSN member on the Law Society council? ‘It’s been an illuminating experience to work in the hallowed halls of the Law Society. I’m very mindful of my BAME constituency and it’s good to be able to influence that debate. Also, I fully support the Society’s drive to maintain access to justice by opposing court fees and legal aid reforms. A large proportion of BAME practitioners are concentrated in the legal aid sector.’

Drawing the interview to a close, the Gazette asks whether Mastin sees herself as a role model for young BAME solicitors keen to follow in her wake? She shakes her head. ‘I can simply encourage others coming through to seize every opportunity, no matter how small, to prove themselves equal to the challenge. Work hard. Each day is a stepping stone to bigger and better things and to more and greater opportunities. That’s where progression stems from.’