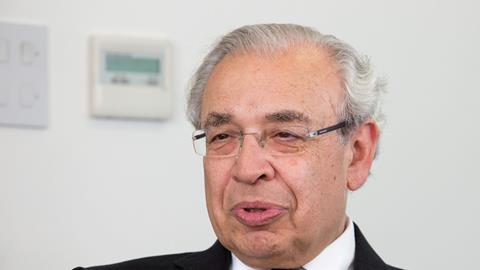 Veteran innovator expounds on the joys of your own brass plate, the need for empathy and why chocolate is healthy.

The ‘pinnacle’ of Ronnie Fox’s 44-year career in the law, he tells the Gazette, was advising The Archers’ production team on the legal aspects of a particular storyline.

A longstanding fan of BBC Radio 4’s everyday tale of country folk, Fox was asked to advise on the case of Asian solicitor Usha Gupta (played since 1990 by Souad Faress), whose law firm partner had been killed in a car accident. Should she find another partner, become a sole practitioner or join an established partnership, the production team wanted to know?

There are other landmarks, too. Nowadays recognised as one of the UK’s most prominent employment lawyers, he was a corporate lawyer for more than two decades; Fox founded two firms with his name on the brass plate and also set up the Association of Partnership Practitioners. He is also the author of more than 100 articles and book reviews on legal and management topics, as well as several books on employment issues and professional practice.

Where did it all start? ‘I knew I wanted to become a lawyer when I was 12,’ he replies. ‘All the other kids only wanted to play the games, but I was the one who read the rules. I even knew that you could mortgage your properties when playing Monopoly. I sublimated it by becoming a lawyer.’

It was then, with Tina Williams (who had worked with him at HONV), he founded the first of two law firms, Fox Williams. He recalls: ‘My initial vision was to establish a traditional corporate firm. I spent the early years bringing in work for colleagues, but an M&A often leads to an employment issue that needs sorting out – somebody has to go, preferably with a golden handshake, for instance. Nobody else wanted to take on these jobs and so I did them. It was a timely career shift. The broad range of skills needed for M&A work was turning the tide against the smaller firms in the market.’

Why, eight years after establishing Fox Williams, did he found the Association of Partnership Practitioners? ‘It filled a gap,’ Fox replies. ‘Those lawyers advising on partnership law and practice were not recognised as having any particular skill. But in fact, partnership law is complex with less statutory material and cases to substantiate it than other areas of employment law. Partnership relationships differ markedly between one firm and another. The culture within different law firms can look similar to the outside world, but very different from the inside.

‘Our primary purpose was to secure recognition for partnership law as a separate area of expertise. Our secondary objective was more one of survival. We were seeing more and more areas of the law becoming increasingly commoditised. There were several thousand members of the Employment Lawyers Association, so it was becoming an ever-more crowded market. There was lots of price competition. And some quite large organisations, such as Slater and Gordon and Peninsula, were moving into employment law, with plenty of money to spend on marketing. We needed to find a niche.’

The discussion turns to some memorable partnership disputes Fox has handled. ‘The worst dispute I’ve dealt with involved members of the same family,’ he recalls. ‘They were running a successful company, but the two halves of the family were at war with one another. It had got so bad that a nephew in one camp had punched his uncle – in the other camp – on the nose.

‘I resolved it by carefully working out what tactics might be successful. These were to invite both sides and their lawyers to a meeting in my boardroom, starting at 10am. I told them that they were there to talk without prejudice about the terms of a settlement, but if we got up from the table without a settlement then that’s the end. They would have to litigate, which would destroy the business.

‘By 12 noon they were hungry and thirsty, but I insisted they concentrated on the negotiations rather than refreshments. By two o’clock in the afternoon we had our agreement.’

Presumably one side was more in the right than the other, so why not litigate? ‘Because very few people who have been through the litigation mill look back on it as worthwhile, even if the financial rewards are considerable,’ Fox replies. ‘The other side can make the whole process painful. You can incur a lot of costs and waste a lot of time.’ He pauses and then, without irony, adds: ‘That’s partly because the English legal system is so fair and so thorough.’

ROLES: articled and then admitted in 1972 at City firm Herbert Oppenheimer Nathan & Vandyk

KNOWN FOR: founding Fox Williams in 1989; the Association of Partnership Practitioners in 1997; and Fox in 2006

The date of the Gazette interview was 10 years to the day since he founded his second firm, Fox. What is this fascination with start-ups and is it not time he hung up his gold fountain pen and retired to tend the roses? These are both questions close to Fox’s heart. ‘There is an excitement in starting your own firm,’ he says.

‘It’s difficult to get it right. All too often, there is too much or too little demand for too few or too many resources.’

Finally, he says, there is the challenge of selecting the right people to make the journey with you. ‘One of my weaknesses is making my mind up about people very quickly. Sometimes I get it right, sometimes not.’ He instances the secretary who has been with him 38 years as an example of getting it right. Another member of staff has worked with him for 37 years.

‘I choose the people I work with very carefully,’ Fox continues. ‘They must have a sense of humour, because without one you don’t cope well with stress. Then you must have the ability to communicate complex legal concepts in a language that non-lawyers can understand. You mustn’t be like some IT people who use language simply to befuddle. What you say must be accessible and help clients grasp the issues.

‘And you need the empathy and psychology to understand human nature and predict how clients might react to a contentious matter that is the most important part of their lives at that moment. Legal education, sadly, doesn’t equip you for dealing with life.’

How does all this translate into day-to-day law firm management? ‘The key to successful management is to get people to play to their strengths,’ Fox says. Some people have a highly developed sense of their own strengths and weaknesses, he adds, venturing into territory that many would consider politically hazardous. ‘Women are better at multi-tasking,’ he opines. On safer ground, Fox ends: ‘Most people have to learn about prioritising.’

So, after an eventful – and fruitful – 44 years in practice, what does the future hold? ‘I’m gradually handing over the management function to my younger colleagues,’ he confides, ‘although I’m still adept at taking the credit for the firm’s successes. It seems to me that US firms in London are doing so well because they are using the talent of older partners better than some of the UK’s larger firms. There are very few partners over 60 in the magic circle, for instance.

‘I don’t want to retire too quickly or find myself a consultant working on my own. I’ve always enjoyed working with a team of people, which is why I’ve never seriously considered becoming a mediator, barrister or going for judicial office. The best progression through life is gradually doing more of what you enjoy most and doing less of the reverse. I’m saddened to see people forced to do work they don’t want to do.’

Any plans for when he does finally retire? ‘The award-winning chocolatier Paul A Young allows me to be called his brand ambassador,’ replies Fox. ‘I’ve a long-term project to write a thesis on the health benefits of chocolate. The very best chocolate contains antioxidants and less sugar than the milk chocolate most people eat. The anti-sugar campaign has been vociferous. I want to put the positive side of chocolate.’

As the interview draws to a close, Fox produces a ballpoint pen that opens out to a rubber stamp with his name, address and website details on it. ‘I like gadgets,’ he says. ‘So much of what I do is serious and yet an important part of my job is to keep my team amused and on-side. The odd gadget helps achieve just that.’